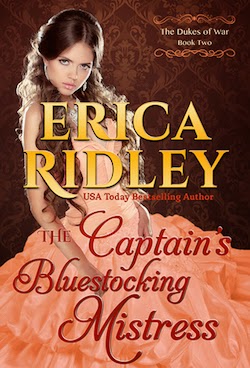 Captain Xavier Grey’s body is back amongst the Beau Monde, but his mind cannot break free from the horrors of war. His friends try to help him find peace. He knows he doesn’t deserve it. Just like he doesn't deserve the attentions of the sultry bluestocking intent on seducing him into bed...

Spinster Jane Downing wants off the shelf and into the arms of a hot-blooded man. Specifically, the dark and dangerous Captain Grey. She may not be destined to be his wife, but nothing will stop her from being his mistress. She could quote classical Greek by the age of four. How hard can it be to learn the language of love?

Like the book before this, (The Earl's Defiant Wallflower) The Captain's Bluestocking Mistress was an enjoyable, quick historical romance. It’s written in the third-person point-of-view from both Jane and Xavier’s POVs. There weren’t any times when I was jarred out of the story because of historical inaccuracies. And the characters behaved in understandable ways. These are two important factors for me these days when reading historical romance.

The main idea in this book is that Jane is invisible among society. No matter how many times she meets people, they never remember her. Not even when she intentionally does or says something outrageous. Books are her only friend until she meets Grace (from the last book). Grace is happily married now and dragging Jane around with her, but that only makes Jane all the more lonely. Books are no longer cutting it as her sole source of companionship. She decides there’s only one thing to do—lose her innocence to the only man she’s ever been interested in, the heroic Captain Xavier Gray. The problem is that Xavier believes he’s unredeemable and unfit for society. Jane crafts a plan to seduce him and a snowstorm helps her on. While stuck inside together, they uncover the truth about each other and themselves.

Unlike the previous book in the series, the conflict is largely internal rather than external. No one is standing in the lovers’ way except for Xavier and his misguided opinions (and I guess Jane's got some misguided opinions of her own). Both characters are fun to read, but Jane's bluestocking ways and her seduction techniques are the most amusing part of the book. I also found myself laughing about the demon cat, which I originally thought would be an annoying part of the plot.

We did have to wait an awful long time for the good part. But the sexy times and uber-romantic happily ever after ending made the wait worth it.

So if you’re looking for a light, enjoyable historical romance about a bluestocking and a grumpy military man, grab this one!

Challenges Update: This is the second book toward the 2015 Historical Romance reading challenge. 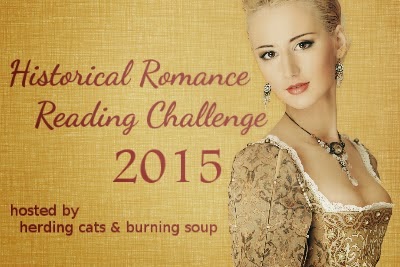