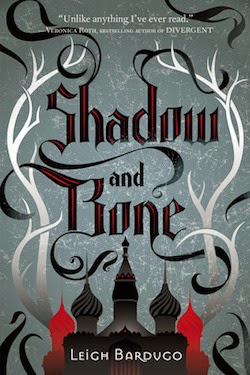 Surrounded by enemies, the once-great nation of Ravka has been torn in two by the Shadow Fold, a swath of near impenetrable darkness crawling with monsters who feast on human flesh. Now its fate may rest on the shoulders of one lonely refugee.

Alina Starkov has never been good at anything. But when her regiment is attacked on the Fold and her best friend is brutally injured, Alina reveals a dormant power that saves her life—a power that could be the key to setting her war-ravaged country free. Wrenched from everything she knows, Alina is whisked away to the royal court to be trained as a member of the Grisha, the magical elite led by the mysterious Darkling.

Yet nothing in this lavish world is what it seems. With darkness looming and an entire kingdom depending on her untamed power, Alina will have to confront the secrets of the Grisha… and the secrets of her heart.

So many YA books feature heroines who learn they had a secret power or destiny all along—a relatively tired trope, and yet…in this book I didn’t mind at all. Probably because the world is so unique and colorful that it makes up for that. It helps that Alina’s secret power becomes apparent when she saves her best friend…and serious crush, Mal. But soon she’s pulled into the ranks of the Grisha as the very first sun summoner and the only individual who can battle back the darkness the Dark Heretic wrought so long ago. That means leaving Mal—a regular old human—behind, and going with the head of the Grisha, the Darkling. He’s handsome, young, beguiling, and the first male who has shown any interest in her. Of course Alina is dazzled, but she’s also wary. Few among the Grisha accept her—an orphan who has no formal training and can barely use her power. But one person becomes her fast friend, beautiful Genya—a tailor and confidant to the Darkling. And just when Alina has begun to trust, she’s betrayed in the worse way possible.

This is a difficult review to write because so much of this book is revealed as it goes and I’m not sure how much would be obvious to everything. A lot of the twists were easy to pick out ahead of time but that didn’t make it any less interesting to read, and most included Grisha-universe bits I never could have guessed.

The book is written in the first person point of view from Alina’s perspective, if you care about that sort of thing. I personally love this type of POV.

In terms of characters, Alina has a droll sense of humor and a self-depreciating way about her I totally identify with, so I instantly liked her. Granted some of that might have been the narrator’s awesome performance (which takes a little getting used to at first because she pauses between lines a bit long). I didn’t really feel one way or the other about Mal. But the Darkling…I wanted to adore him because he was clearly so…dark…but there was just something missing.

In terms of the plot, a good chunk of it is spent on setting up the world, then another chunk on Alina learning the Grisha ropes, and the last chunk spent on the action. So much happens in the last third or quarter, but you have to slog through the relatively slow first sections in order for any of the action to make sense. It is worth it though because this is so unique and…well, cool.

In terms of the kind-of-love-triangle, I was never really team Mal, but I wasn’t fully team Darkling either. Mal was just too much of a player in the beginning for me to forgive him even though Alina does. I can never quite understand how someone can apparently be in love with someone else and yet sleep with every girl he sees while he’s hanging around with his supposed love.

Grab this if you’re looking for a YA fantasy that breaks the norms. 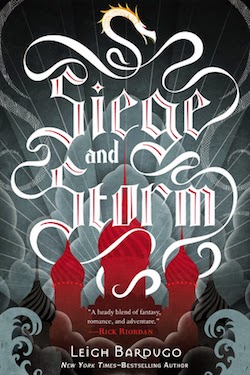 Hunted across the True Sea, haunted by the lives she took on the Fold, Alina must try to make a life with Mal in an unfamiliar land. She finds starting new is not easy while keeping her identity as the Sun Summoner a secret. She can’t outrun her past or her destiny for long.

The Darkling has emerged from the Shadow Fold with a terrifying new power and a dangerous plan that will test the very boundaries of the natural world. With the help of a notorious privateer, Alina returns to the country she abandoned, determined to fight the forces gathering against Ravka. But as her power grows, Alina slips deeper into the Darkling’s game of forbidden magic, and farther away from Mal. Somehow, she will have to choose between her country, her power, and the love she always thought would guide her--or risk losing everything to the oncoming storm.

Given this is the second book in a series, it’s pretty much impossible to review it without listing spoilers about what happened in the previous book.

Back away if you don’t want the first book ruined…

With the Darkling’s collar around her neck, Alina and Mal can only hope to be free by running across the sea. Unfortunately they’re easy to track thanks to the golden pins they’re selling to stay alive. And the Darkling has help in the form of a privateer named Sturmhond and the ability to create nearly invincible shadow beings from nothing. *takes a breath* That brings us up to…um about the quarter point of the book.

Like the first book, there’s a huge lull where not much action happens…well, except Alina becoming even more Grisha than Grisha (sorry, now I’m channeling White Zombie), Sturmhond wheedling his way into your heart, and Mal becoming a complete jerk. In Mal’s defense, Alina does keep some very important information from him. But the gal thinks she’s going crazy. I can kind of understand her initial hesitance. It just goes on far too long.

Besides Sturmhond, we meet some new characters. And since I listened to this instead of read it, I have no hope of spelling their names. They’re kickass twins who become Alina’s guards. We also get to see the cult devoted to Saint Alina start from a small group of hangers-on and build to an army.

Somehow I grew to like the Darkling in this book even more despite him being far, far worse and…not even present for the majority of the time! I know, I don’t even understand it. Except, well the evil stalker vibe kind of does it for me. By the end the author had me questioning if the Darkling even was a villain or if he was the only true hero. Amazing writing right there. *nods*

Again a heap of action happens all right at the end, and again I was left salivating for the next book. I made myself hold off so I’d have time to write this review, but that was the only thing holding me back.


Seriously, grab this if you like YA and want something fresh.

Challenges Update: Siege and Storm is the first book toward the 2015 Audiobook Challenge (I listened to the first book in the series last year). I'm starting off with a goal of six, but hope to do more!