Review: First Grave on the Right 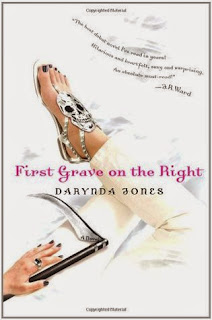 Charley Davidson is a character I've been hearing about for awhile now. She's a private investigator that just happens to also be a grim reaper. If that's not enough, she helps solve cases with her Uncle who works for the police department. This is the first book in the series and Charley is helping with the curious case of three lawyers being murdered in the same day. The ghosts come to Charley since she's basically a beacon to them so they can cross through her. I haven't read many grim reaper types of books, so this one was of a major interest to me. It's not all work and no play for Charley though....

Charley has been having some ongoing naughty dreams of a mystery guy. Things turn weird when she hears him call her Dutch, which only one person has called her in her entire life. Reyes, a guy she met when she was a teen is somehow entering her dreams and turning them x-rated. Woo *fans self* there are some quite steamy scenes when Reyes is involved. I'm intrigued to see how their story comes to play in the next few books in the series.

I'm loving everything about this book. The characters are awesome, I really enjoyed Charley's BFF and secretary extraordinaire, Cookie. She's witty, and a coffee addict, basically a woman after my own heart. She also keeps Charley sane by making her fill her in on all the info she misses during Charley's investigations/ghost experiences.  I highly recommend this book/audiobook (if that's your style) if you're looking for a PI/grim reaper type of read.
Posted by LilyElement at 12:00 AM