Review: Demons in My Driveway 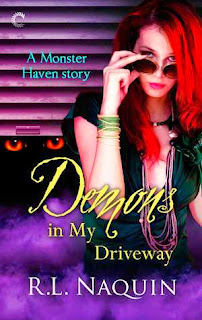 Zoey Donovan is one of the very few Aegis left in the world. She helps the Hidden stay safe in the human world. Her house is generally bursting at the seems with creatures that need some help or somewhere safe to stay. This time around things are a bit different. Zoey's mother is back in the picture and living at her house. But that's not the only change, the reaper boyfriend we've all grown to love is out of the picture, though they're still friends. Being an Aegis is taking a toll on Zoey, and it will just get worse since the other few Aegis's are being killed one by one. Someone is opening portals and releasing monsters, which is causing a lot of issues. With Zoey on lock down in her house so she doesn't leave the protection, she has to somehow figure out who is behind the attacks before it is too late.

While this installment wasn't go go go like the previous book or two, it was still a pretty solid addition to the series. I'm so sad that the next book is marked to be the last one but I am happy to hear that there will be additional books from that world in the future. Zoey has gone through so much since she found out she's an Aegis, and I hope to see it wrapped up nicely in the next book. I highly suggest this series if you're looking for a unique Urban Fantasy.