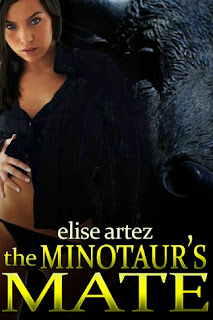 I had someone tweet me a link to this book the other day so I snagged it since it was a freebie and a bit different from what I normally read. You see, the book revolves around Kiryn, a girl attempting to run away from home and her arranged marriage. She attempts to steal a statue/figurine one night, which she can sell to start her running away and is caught in the act. Her punishment is to work at the farm that she stole from. There are minotaurs, human bodies with bull heads at the farm. They are kept so their essence can harvested. Anyway, Kiryn is saved twice by a minotaur named Rogan. There is an attraction there, but one or both of the characters tries to deny it. The book itself was a fairly good read. It's erotic, heat level was hot and there are several sexual scenes in this small novella. I'm picky on novellas since it's hard to tell a story in just a few pages, this one executes it quite well though. I was pleased that it had a story arc and completed said story arc without being super rushed. I'd recommend this one if you're looking for a hot minotaur read.
Posted by LilyElement at 12:00 AM

Email ThisBlogThis!Share to TwitterShare to FacebookShare to Pinterest
Labels: Elise Artez, Melissa, Review, So you don't have to