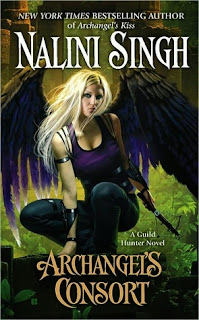 Vampire hunter Elena Deveraux and her lover, the lethally beautiful archangel Raphael, have returned home to New York only to face an uncompromising new evil…

A vampire has attacked a girls’ school—the assault one of sheer, vicious madness—and it is only the first act. Rampant bloodlust takes vampire after vampire, threatening to make the streets run with blood. Then Raphael himself begins to show signs of an uncontrolled rage, as inexplicable storms darken the city skyline and the earth itself shudders.

The omens are suddenly terrifyingly clear.

An ancient and malevolent immortal is rising. The violent winds whisper her name: Caliane. She has returned to reclaim her son, Raphael. Only one thing stands in her way: Elena, the consort who must be destroyed…


Elena Deveraux returns in book three of the Guild Hunter series. She's an angel that is also a vampire hunter. Raphael, her love interest is the archangel of New York. I think I enjoy Raphael's character more so than Elena. It could be because he's a sexy alpha angel. This time around there are vampires going crazy and attacking people due to bloodlust. One of the attacks is on a girls' school and it just so happens Elena's half sisters go there. All the vampires going crazy is leading up to an ancient archangel awaking. I enjoyed this installment in the series more so than the previous book, but it still didn't wow me like the first book did. I plan on continuing the series to see how it goes though. I'd suggest this series if you're looking for a sexy alpha angel.