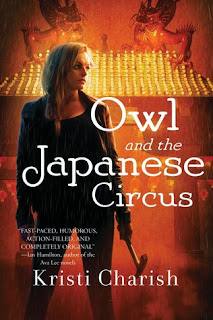 Alix aka Owl is an ex-archaeology student turned thief for the highest bidder. She is on a job for a dragon and I kind of feel bad for her, she hits a ton of bumps in the road on her journey. Luckily for us, that leads to a very interesting read. There are several things standing in her way, one of which being some vampires on her trail. Her boss decides to step in and discourage their interference so she can find the object easier, but that doesn't resolve all the issues she faces. And believe me, you don't want to piss off a dragon.

Owl's journey starts in Vegas where she takes the job, then she quickly hops a flight to Tokyo where she teams up with her best friend Nadya. Nadya's character is the kind of gal that goes out of her way to help her friends. I really enjoyed her, and hope she plays a bigger role in the next book. In an effort to learn a bit more on where the item is, Owl follows the trail to Bali and that's where things start to get tricky for her. Rynn, a guy she met in Tokyo on a past trip gets roped in to going to Bali with her (without her knowledge) to watch over her. Owl's character is a gamer girl that is a thief as well. She's not so great socially, but she tries. So when Rynn appears in Bali, I knew it was going to get awkward for her.

There are several different types of paranormal beings in the book, some of which I don't see often, vampires, nagas, dragons and succubi to name a few. Owl's adventure is action packed and on the move quite often, all while being easy to follow and grabs your interest. The plot is simple, find the item and return it to Mr. Big Bad Dragon without dying and get the money. All the bumps in the road though is another thing. I don't know how Owl manages, she must be part leprechaun with all that luck. Oh and I can't forget Captain, her cat that hunts vampires. He's mentioned several times, and I loved that Owl had a tiny feline sidekick. All that being said, I cannot wait for book two, I want to know what happens next. There wasn't a dull moment in Owl's story, and I recommend this for anyone looking for a strong Urban Fantasy.

Thanks for joining us, Kristi! I have to say, Owl and the Japanese Circus was a great read, I'm really looking forward to book two.

Thanks for having me on the blog, Melissa! I’m always happy and flattered to hear people had fun with the book!

Q: I really enjoyed Owl's character while reading. She's an ex-archaeologist turned antiquities thief, what was your inspiration for her character?

It’s no secret Indiana Jones and Rick O'Connell from The Mummy are big influences- they’re two of my all time favorite movies. I also really wanted to write an 80's style adventure but with a female protagonist who gets to be Indy, not saved by him. Owl’s intentionally rough around the edges because that type of geeky/awkward character is someone I can relate to. She’ll never be the knock-out urban fantasy heroine and she doesn't want to be. There’s certainly a bit of myself is in Owl’s voice- it’s hard not to add a bit of yourself in when writing first person narrative- but she’s also her own character.

Q: Who would you rather face off against - naga, succubus, or dragon?

Ooooo...You know, if you had of included incubus in that line-up it’d have been an automatic yes. I’d go a few rounds against Rynn! ;-) With Rynn out, I think I got to go for the Naga. Not because they’d be easy or I know some secret way of defeating a Naga, but because they have a tendency to lose their temper which means I get the chance to run!

Haha I picked Rynn myself, so I left him out of the equation ;)

Q: If you were one of the paranormal types in your book, what would you want to be and why?

I'm tempted to say dragon. Not for the personality, mind you, but the treasure (it’s the video game loot gremlin in me coming out). Definitely not a vampire- to creepy with the whole pheromones intoxicating and subduing their prey thing...

Outside the dragon, I think I got to go with Naga. I've got a soft spot for Lady Siyu. She might be terrifying but she knows how to get things done. Plus, fangs and venom. There’s got to be a serious bonus from that!

Q: Owl was a pretty big gamer in her off time, did that come from you? If so what game(s) do you play?

I am huge fan of RPG video games. My all time favorites include Mass Effect (all of them), Dragon Age, especially Dragon Age 2 (loved the characters and the crazy romance story lines), and Far Cry 4 (Pagan Min and the worlds worst Yogi's). Video games were a huge inspiration for me when I started writing five years ago, around the time Dragon Age Origins came out. There is some amazing storytelling that’s been done in videogames over the past ten years and I often think games like Mass Effect don’t get enough credit for their contribution to science fiction. It’s a new storytelling medium and we've just started to see what it can do.

Next on my list I’m going into the game archives to play Final Fantasy 6 & 12.


Q: Owl and the Japanese Circus had a ton of adventure, what can we expect to see in book two, Owl and the City of Angels?

You’ll still see tons of adventure! In Owl and the City of Angels we see Alix attempting to settle in to her new job- with mixed results. When Mr. Kurosawa sets his sights on the Syrian City of the Dead. I can’t give too many details, but there is definite globetrotting including a visit to one of the most famous archeology sites in the world (and the location of one of my favorite movies).

Kristi is super awesome and is going to do a giveaway for a lucky reader. One winner will get an ebook copy of Owl and the Japanese Circus. (open to INT)

Enter by leaving a comment below and filling out the form.

Giveaway will end on 01/22/2015, and the winner's contact information will be sent to the author. Good luck!