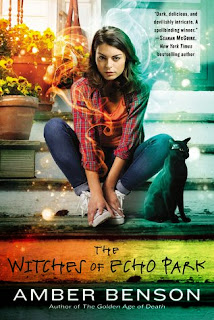 Unbeknownst to most of humankind, a powerful network of witches thrives within the shadows of society, using their magic to keep the world in balance. But they are being eliminated—and we will all pay if their power falls…

When Elyse MacAllister’s great-aunt Eleanora, the woman who raised her, becomes deathly ill, Lyse puts her comfortable life in Georgia on hold to rush back to Los Angeles. And once she returns to Echo Park, Lyse discovers her great-aunt has been keeping secrets—extraordinary secrets—from her.

Not only is Lyse heir to Eleanora’s Victorian estate; she is also expected to take her great-aunt’s place in the Echo Park coven of witches. But to accept her destiny means to place herself in deadly peril—for the world of magic is under siege, and the battle the witches now fight may be their last...

Why I am waiting:
It's been awhile since I've read a witch book, this one caught my eye while looking at coming soon books.
Posted by LilyElement at 12:00 AM