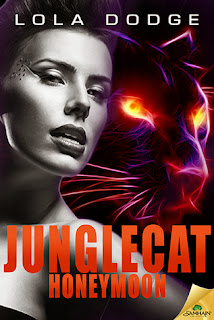 Since that fateful airline flight where Ivory met her mate, she has struggled to control her ice powers. But on her wedding day, she has it all: an adoring panther-shifter husband, a pack of superhero friends, and a level of happiness she never imagined was possible.

Until she meets her mother-in-law.

Instead of waking up from a blissful wedding night at Panther's side, Ivory wakes from a drug-induced haze, alone in the middle of a strange jungle. Mommy dearest has dropped her in South America, forcing Ivory into a twisted test of her worth. If she doesn't measure up to the tribe's standards, the marriage won't be acknowledged.

Although Ivory loves a fight, she's not into war games. Especially when victory might entail killing her new brother-in-law in an honor duel. But with her future on the line, holding back isn't an option.


Warning: Contains one tribe of sexy panther-shifters in steamy jungle climates and the unforgivable torture of a Vera Wang wedding gown.

Junglecat Honeymoon is a short novella that expands the story between Panther and Ivory, their main story can be found in Ivory. This time around Ivory is marrying her love, and the wedding is beautiful. She is surrounded by her friends and gets to meet Panther's mother. But pleasantries are not surrounding what is supposed to be the happiest day of her life. She's drugged, her powers are blocked and she's dropped in the jungle to prove she's worthy of marrying Panther. All I could think of is how is she going to get out of this?

Lola Dodge actually wrote this for Sharonda @ Brazen Babe Reviews and I because we both read Ivory and were fighting over who got Panther as their book boyfriend. While I do love Panther, I'm intrigued by Quan, his sexy brother now. I hope to see his book in the very near future, because I adore LDodge's sexy panthers. All in all this was a nice addition to Ivory and Panther's story and I was glad to see more of them. While the majority of the series can be read in any order, I would read Ivory first if you're wanting to read Junglecat Honeymoon. I suggest this series if you're looking for awesome novellas that contain superhero love.