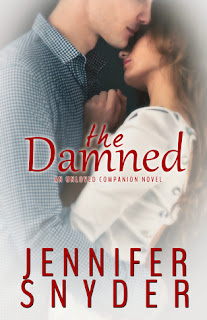 Cole Porter is a teen that doesn't have an easy life. He has to take care of himself, since his mother isn't really there to be a mother. His older siblings left the nest as soon as they turned 18, so he's left to fend for himself. When his Mom goes to jail, he gets in contact with his older sister and moves in with her and her boyfriend.

Emory Montgomery is a golden child. She is the type of child that strives to do no wrong, the type that every parent should cherish. Her family isn't the most supportive though, they expect her to be that way. If she so much as steps a toe out of line her mother guilts her into what she wants. The father is out of the picture for the most part, he's always away on business. Emory has to keep an insane schedule her mother sets, she does gymnastics and she pushes herself until she is ready to break.

I'm not going to go into a ton of detail as I don't want to ruin the story, but just know The Damned addresses issues that I don't see in many books, those being self mutilation (cutting) and an eating disorder. I think it's great that JSnyder wrote these characters and what they're going through. It brings awareness to both, which are more common than you think. I wish/hope kids in high school read books like this so they know they're not alone. That they need to seek help if they're going through these thoughts/actions. The story itself is told in alternating POV between Cole and Emory. JSnyder always manages to pull off the alternate POV wonderfully. I'd suggest this if you're looking for a YA/NA read.