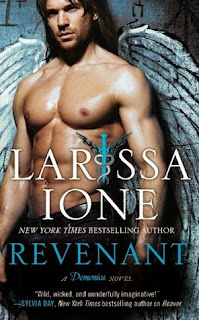 Revenant is an emotional addition to the Lords of Deliverance series. I've been waiting on his story, and was so glad when release date rolled around. Revenant was brought up in Hell and had to endure and survive both emotional and physical torment. His brother, Reaver was chosen to live in Heaven when they were born. Add in his mother's death and his part in it and it has definitely caused some resentment and bitterness in Revenant. He's a really strong character, and all alpha male. A bit flawed, and a stickler for the rules I was intrigued how it would turn out when he sets his sights on Blaspheme.

Blaspheme is a false angel, or so she leads everyone to believe. When her secret is slowly being revealed, she has to find a way not to be hunted and killed. You see, she's half angel and half fallen angel. That's a big no no in their world, so with her cover fading, angels are starting to come around and hunt both her and her mother. I really enjoyed Blaspheme's character. She's trying so hard to stay away from Revenant, but you can just see the tension between to two from the start.

Larissa Ione is by far one of my favorite authors. I started the Lords of Deliverance late in the game and quickly picked up several of the books to marathon read. Since I'm all caught up, I loved that I saw glimpses into some of the previous main characters in other books in this series. The world is addicting, I highly recommend this series as a whole if you're looking for an Urban Fantasy with some Paranormal Romance tossed in.

Giveaways:
a Rafflecopter giveaway
The publisher is also letting me giveaway one copy of Revenant to one lucky person on my blog. Winner will be chosen on 12/28/14 and contacted for shipping details. I will provide your information to the publisher. Open to USA & Canada.