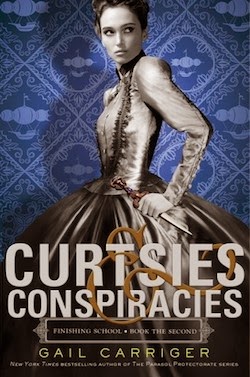 Sophronia has come a long way since term one at Mademoiselle Geraldine's Finishing Academy for Young Ladies of Quality (pronounced quali-taaaay). She’s a wiz at climbing to her floating school’s boiler room without being caught by roving mechanicals and calculating the correct amount of foxglove to put down an enemy dinner guest. But when she earns the highest marks in school her friends shun her, making this once independent young lady horribly lonely. Who would have thought she’d miss her friends? Not to mention persuading her friend Dimity that someone is out to kidnap her and her brother is difficult with Dimity giving the cut direct. Fortunately the sooties aren’t in on the game. Unfortunately head sootie Soap is becoming a little too familiar. And the arrival of the boys from Bunson’s evil genius school brings peer of the realm Felix to the ship—the boy Sophronia left dancing alone in the last book. Felix finds Sophronia’s aloofness all the more alluring. Sophronia has her work cut out for her if she’s going to solve the many mysteries she’s stumbled into without getting tangled in more drama. But when she’s the only one recognizing a problem exists, who else is going to save the day?

The second book in the Finishing School series feels a bit less middlegrade than the first, though it’s still lower YA rather than upper. There is a little kissing (hooray!) and development of actual love interests in this book. Yes, plural! Poor Sophronia is stuck between the son of a duke and her beloved sootie friend Soap. Though we’re not quite to a love triangle yet, the author has definitely put us on the path to one. If you despise those, perhaps stay away (though I think it’s well done so far).

As with Etiquette & Espionage, book 2’s title and cover are clever. Sophronia is a great heroine who never had me head-desking because of her actions. This is still what I’d call a “fluffy” steampunk, but one change is that the author has introduced several new factions working on the political scene. This complicates matters both for Sophronia and for the reader who is trying to keep it all straight (and the names that go with them – e.g. Picklemen [though I lol’d at “Gherkin status” for their highest ranking members]).

There’s less character development in this book than the previous. We do, however, get an interesting twist. Sophronia spearheads a “character assassination” that leads to some serious consequences. She’s left with guilt that has her questioning if this life is for her despite her excellent marks.

I look forward to what conclusion Sophronia comes to further on in the Finishing School series.