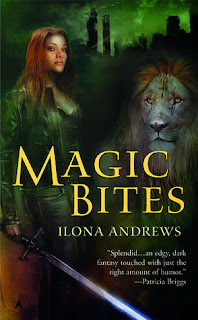 When the magic is up, rogue mages cast their spells and monsters appear, while guns refuse to fire and cars fail to start. But then technology returns, and the magic recedes as unpredictably as it arose, leaving all kinds of paranormal problems in its wake.

Kate Daniels is a down-on-her-luck mercenary who makes her living cleaning up these magical problems. But when Kate's guardian is murdered, her quest for justice draws her into a power struggle between two strong factions within Atlanta's magic circles.

The Masters of the Dead, necromancers who can control vampires, and the Pack, a paramilitary clan of shapechangers, blame each other for a series of bizarre killings—and the death of Kate's guardian may be part of the same mystery. Pressured by both sides to find the killer, Kate realizes she's way out of her league—but she wouldn't have it any other way…


Kate Daniels is a mercenary that is searching for a person that murdered someone she was close to. While investigating, she's thrown into issues between the pack and the vampires. The story is a whodunit, and had plenty of twist and turns. The leader of the shapechangers, Curran was interesting. He's a cat shifter, and I'm curious if he'll be a love interest in future books. There is something there between them that I'd like to read/listen more of. The magic/technology aspect had me intrigued. Sometimes when magic works, the technology doesn't and vice versa. I'm hoping to see this expanded upon future installments.

The world building is nice though it did leave me wanting to know a bit more. I rather intrigued by this series as a whole and I'm sure my curiosity will be sated when listening to the next few books. The characters, oh my. Kate is a strong woman, she knows who she is, she doesn't have self doubt and is ready to take on the world. She's strong, but at the same time she's able to be harmed. She knows that and is up for a challenge. I've been putting off reading this series, probably due to the fact that there are so many books in the series that it makes me have the I'll never catch up feeling. I'll be listening to the next few audiobooks in the near future. I suggest this series if you like tough female leads in a well thought paranormal element.