Sealing the Deal - Sandy James
When Bethany Rogers's sister dies in combat in Afghanistan, Bethany, a teacher and part-time interior decorator, takes in the nine-month-old daughter her sister left behind. As she struggles with the challenges of raising a young child, she gratefully accepts the help of her fellow Ladies Who Lunch as well as Robert Ashford, her longtime friend and boss at Ashford Homes. Robert is great with kids and has always mentioned wanting a family of his own. Beth soon feels more than gratitude toward her handsome helper, and longs to give in to the growing heat and desire brewing between them. But will loving Robert further complicate her already spinning-out-of-control life? And is he drawn to her, or to the idea of a ready-made family?

Dirty Rowdy Thing - Christina Lauren
Despite their rowdy hookups, Harlow and Finn don’t even like each other...which would explain why their marriage lasted only twelve hours. He needs to be in charge and takes whatever he wants. She lives by the Want-something-done? Do-it-yourself mantra. Maybe she’s too similar to the rugged fisherman—or just what he needs.

Midnight Action - Elle Kennedy
Ex–army ranger Jim Morgan leads a team of elite mercenaries, but eighteen years ago in Paris, he was part of a black ops unit whose mission was to hunt down a rogue operative. In order to trap the criminal, Jim seduced Noelle, the man’s daughter—a ruthless act that cost him the love of his life and turned her into a mortal enemy. Now he can’t trust her, but he still desires her. He also needs her help....

Older, wiser, and unwilling to play the fool again, Noelle runs a group of highly skilled assassins. And she’s just been offered the hit of the century: Eliminate Jim Morgan. History gives them no reason to trust each other, but with their lives in jeopardy at the hands of a common enemy, the lines between love and hate are soon blurred. Now Noelle and Jim must face the past if they want to have a future—let alone a future together.

Edge of Betrayal - Shannon K. Butcher
The covert organization known as the Edge is in full rescue mode, having been ordered to find the victims of the dreaded Threshold Project—and also to bring Adam Brink into the fold. Brink previously worked for Threshold, and may know how to stop the terror.

Mira Sage knows Adam’s dark past. She’s created a database of Threshold survivors whose lives were destroyed by the experiments of the twisted Dr. Stynger—and is driven to save them. If working with the duplicitous Adam will help her, she’ll play along.

Even as Mira secretly seeks to prove Adam is still a traitor, Adam has his own agenda that no one must discover. But when the two find their goals pointing in the same direction, Mira will be tested to believe in the one man she can’t trust. The one man she can’t resist…

Make You Remember - Macy Beckett
He's about to make his own luck.

Ten years ago, Beau Dumont made the biggest mistake of his life by letting his high school sweetheart, Devyn Mauvais, slip through his fingers. Now the reformed bad boy will stop at nothing to get her back. Even if it means tricking her into taking a job on his family's riverboat, The Belle of the Bayou.

When Devyn's old flame offers her a stint at the boat's day care center, she sees it as a chance to prove she isn’t just the descendant of Louisiana's most infamous voodoo queen. Besides, it beats leading ghost tours around New Orleans. Yet when it comes to Beau, Devyn's all business. She won't give the sweet-talking playboy another chance to break her heart.

But there's no escaping temptation in such close quarters, and Beau won't be satisfied with a few hot nights with the girl he's always loved. As he strives to make Devyn remember the good times, will his passion and heart be enough to regain her trust? 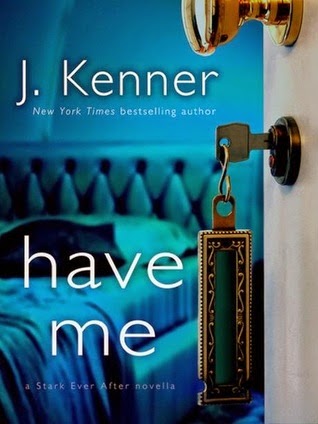 Have Me - J. Kenner
Our wedding was everything I dreamed of, and now the honeymoon is a living fantasy. To be Mrs. Damien Stark is the ultimate rush—to know that our claim to each other is real, our fierce passion sealing our bond. My kiss is forever his, his touch is forever mine.

We both harbor deep scars from our pasts, and we’ve done everything we can to lay our ghosts to rest. But there are still dreams that haunt me, and people that threaten to tear us apart.

Our shared ecstasy makes me feel alive, and I’ll do anything to keep Damien close. He is my future, my hope, my every want and need. And once you’ve tasted that kind of obsession, nothing can make you give it up.

Heart Fire - Robin D. Owens
On the planet Celta, accepting a HeartMate can be the greatest challenge in the universe…

Antenn, an architect hired to build a cathedral in Druida City, dares not think of his HeartMate. Even though he yearns for her, he’s taken steps to ensure she will be forever unknown to him. After all, how could he, a commoner who grew up in the slums, the brother of a murderer, be worthy of any woman?

Tiana, a priestess, has her own fears about being a HeartMate. She's watched her friends struggle with such a stormy destiny. She's sure her HeartMate has never claimed her due to a terrible scandal involving her Family, and she's set aside hopes for love.

Antenn's gotten the commission of his life. The cathedral will make him famous, but more, it will last for ages and prove to others he can contribute to Celta...if the controversial structure isn't destroyed while being built. Tiana, too, is an integral part of this process, but the villain who wrecked her Family is ready with firebombs. Can they trust each other in dangerous circumstances to succeed...and to love?

Romancing the Billionaire - Jessica Clare
Jonathan Lyons. Playboy, billionaire, and adventurer, he lives life on the edge. When he hears that his mentor, Dr. Phineas DeWitt, had a secret journal that leads to a legendary artifact, Jonathan takes action. It stirs his blood, but it comes with a heady challenge: DeWitt's daughter Violet. She has what Jonathan needs. And she’s not giving it up it to the man who broke her heart.

Violet is Jonathan’s weakness—he’s still in love despite their volatile breakup a decade ago. But Violet’s memories have a sharper edge. She’s never forgiven him for abandoning her. Or so she thought. When Jonathan’s attentions turn seductive, she’s in danger of falling for him all over again. And she can’t help but wonder... does he really want her, or just what she's hiding?

Waistcoats & Weaponry - Gail Carriger
Class is back in session...
Sophronia continues her second year at finishing school in style--with a steel-bladed fan secreted in the folds of her ball gown, of course. Such a fashionable choice of weapon comes in handy when Sophronia, her best friend Dimity, sweet sootie Soap, and the charming Lord Felix Mersey stowaway on a train to return their classmate Sidheag to her werewolf pack in Scotland. No one suspected what--or who--they would find aboard that suspiciously empty train. Sophronia uncovers a plot that threatens to throw all of London into chaos and she must decide where her loyalties lie, once and for all.

Not Until You - Roni Loren
Cela knows how to be good. She’s had a lifetime of practice. But on the night of her college graduation, she decides she’s earned one wild night before she has to move back home to her overprotective family. So when the hot neighbor she’s been quietly fantasizing about for a year suggests a game of Never Have I Ever, she’s ready. But what starts out as a simple game takes an unexpected turn. Because Ian Foster doesn’t play games he can’t win.

Foster knows his desires aren’t for the faint of heart, especially not for someone as sweet and innocent as his pretty neighbor. But when Cela shows up at his door with an invitation that surprises him, he can’t resist indulging. Cela has no idea what she’s in for. The secret dark side of this man’s need will both intrigue and terrify her. But Cela has a secret of her own—and a new game to see just how far they’re both willing to go, and how much they’re willing to risk by crossing every boundary of desire.
Posted by LilyElement at 12:00 AM