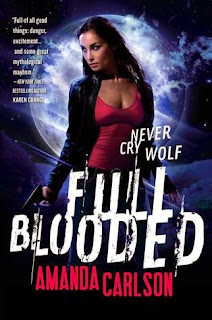 Born the only female in an all male race, Jessica McClain isn’t just different—she’s feared.

After living under the radar for the last twenty-six years, Jessica is thrust unexpectedly into her first change, a full ten years late. She wakes up and finds she’s in the middle of a storm. Now that she’s become the only female full-blooded werewolf in town, the supernatural world is already clamoring to take a bite out of her and her new Pack must rise up and protect her.

But not everyone is on board. The werewolf Rights of Laws is missing text and the superstitious werewolves think that Jessica means an end to their race. It doesn’t help when Jessica begins to realize she’s more. She can change partway and hold her form, and speak directly to her wolf. But the biggest complication by far is that her alpha father can't control her like he can the rest of his wolves.

When a mercenary who’s been hired by the vampires shows up to extract information about the newly turned werewolf only days after her change, they find themselves smack in the middle of a war and there's no choice but to run together. When it’s up to Jessica to negotiate her release against her father’s direct orders, she chooses to take an offer for help instead. In exchange, Jessica must now swear an oath she may end up repaying with her life.

Jessica McClain is the only female werewolf born, and hasn't experienced a shift her entire life so she never thought it would happen. She separated from her family (pack) so she could lead a normal human life. Imagine her surprise when her shift beings and she doesn't know what to do. This throws her back into her pack's life to talk to her father, the alpha, on what she should do. Since she never carried the shifter gene that would allow her to shift, no one really had a plan of action if it came about.

There is also the myth that has followed Jessica since she was born, that a female werewolf would bring destruction to the pack. Naturally that has turned some of her pack mates against her from the start, though most had relaxed since she grew into adulthood without shifting. When news gets out about her new found ability, everyone is in an uproar and is out to get her.

I honestly regret not reading this book sooner. It's been sitting on my bookshelf for the past year waiting for me. The world building is excellent, and the story sucked me in from the first page. The characters are enjoyable and I was wondering who would be the love interest. I was hoping for the hunky second in command when he was first introduced. It leaves off on a cliffhanger of sorts, and I already know I'll be reading Hot Blooded, book two in the series, next so I can see what happens. I recommend this book if you're looking for an engaging read with werewolves.