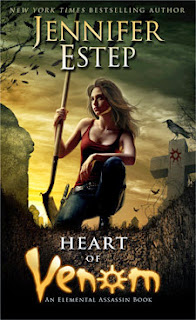 When a terror from the past threatens Gin’s friend and body-disposer, Sophia, Gin will stop at nothing to protect her, even if it means walking straight into a killer’s trap. Meanwhile, the rocky romance between Gin and Owen reaches a turning point—can they reunite and rekindle their love? Or will the things Gin has been forced to do in her line of work as the deadly assassin the Spider keep them apart forever? Assuming, that is, she survives long enough to find out…


Gin Blanco returns in book nine of the Elemental Assassin series. This time around Gin is dealing with her friend being abducted. Sophia was taken by a crazy man named Harley Grimes, who kidnapped her in the past to tortured her and hasn't gotten over that fact that he didn't break her before she was rescued. This time around you get to see how dark and twisted JEstep's villains can be.

I was kind of surprised by our leading lady and how she acted in Heart of Venom. Don't get me wrong, I can understand why, but it was unlike her. Gin has always been a calm, calculating assassin, but since this time it is personal, she rushes and has to figure things out as it goes. She does have the help of her friends, but I wasn't sure how it was all going to play out.

There are several bits of character growth in Heart of Venom, one being finally getting more information on Sophia. Her character has always intrigued me, and previous books had only given glimpses of details of her past. I was sad to hear her story, but I can understand her character a lot better now. Another instance is Owen, the love interest. I was kind of pissed off the last few books due to Owen. He made a colossal mistake and I was glad to see him prove himself. I really like his character, and hope Gin and Owen manage to make it work in future books. The Elemental Assassin series is one of my favorite Urban Fantasy series that I've read so far. It has a bit of everything I could ask for, romance, strong friendships, and a hunky love interest. I highly recommend this series if you haven't read it yet.