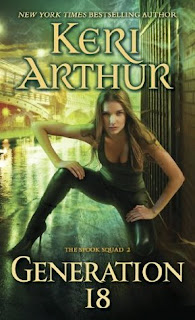 A serial killer strikes every twelve hours. A vampire takes lives at random. At first glance, these tragic incidents seem unrelated. But Special Investigations Unit agents Sam Ryan and Gabriel Stern trace them both back to a military base known as Hopeworth. Is the murder spree part of a cover-up? And are the vampire killings less by chance and more methodical?

The investigation takes an eerie, personal turn when Sam discovers a connection between herself and the victims—and a clue to her own mysterious origins. With the violence escalating and the danger drawing closer to home, the stakes are raised and the mission changes from seeking justice to ensuring Sam and Gabriel’s own survival. And the one person who seems to hold all the answers—about Hopeworth, about Sam’s past—is a mystery man she isn’t sure she can trust. They share a psychic link through her dreams, and he once saved her life, but he may just be the greatest enemy humankind has ever known.


Samantha Ryan returns in book two of the Spook Squad series. Sam is part of the Special Investigations Unit, aka Spook Squad. Her partner, Gabriel  is kind of rude and doesn't want a partner, If it were up to him, she would be transferred or just on desk duty. He tries his hardest to keep her out of the dangerous situations, but she somehow finds her way to them anyway. It kind of aggravated me while reading. I know he'll be a love interest later on in the series, and he has that super over protective vibe. The reason behind it though is noble. His previous two partners were killed in the line of duty, so he doesn't want something to happen to Sam because he cares about her. He just shows it in the wrong way.

The big case in Generation 18, is a crazy person that is brutally killing people. Sam has to hunt down the person and solve the case before a lot of people are murdered. Along the way, she discovers some things that shed a bit of light on her childhood. Since it was a complete mystery in book one, I was really happy to see what might come in the next book. I'd strongly suggest this series be read in order, just for the fact that you'll understand the structure of the series better. Otherwise you won't know what the heck kite monsters are, or how the police are different from the SIU.

I wasn't insanely impressed with book one of this series, but I think that was a personal issue with not being familiar with this world. Since book two shed a lot more light on what the series will hold, I know book three is going to be a great read. I recommend this series if you like Urban Fantasy with a law enforcing lady struggling to find out more about her past.