The Prince Who Loved Me - Karen Hawkins
A handsome, rakish prince who doesn't believe in true love meets a stubborn lass who will settle for nothing less...

Prince Aleksey Romanovin enjoys his carefree life, flirting—and more—with every lovely lady who crosses his path. But when the interfering Grand Duchess Natasha decides it's time for her grandson to wed, Aleksey finds himself in Scotland, determined to foil her plans. Brainy, bookish, and bespectacled, Bronwyn Murdoch seems the perfect answer—she isn't at all to the duchess' taste.

Living at the beck and call of her ambitious stepmother and social butterfly stepsisters, Bronwyn has little time for a handsome flirt—no matter how intoxicating his kisses are. After all, no spoiled, arrogant prince would be seriously interested in a firm-minded female like herself. So . . . wouldn't it be fun to turn his "game" upside down and prove that an ordinary woman can bring a prince to his knees? 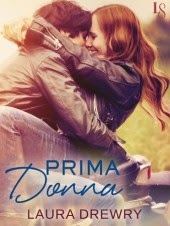 Prima Donna - Laura Drewry
In a witty, sizzling, and tender romance for readers of Jill Shalvis and Susan Mallery, a woman who can’t slow down discovers that the perfect guy is in hot pursuit.

Even when her hair salon goes under and she’s on the brink of breaking, Regan Burke keeps her “I’m just fine” attitude. She’s had a tough life, coping with a difficult family and keeping her act together . . . barely. Right now, she just needs a job, any job, so she can pay her mother’s medical bills. It’s the exact wrong time for Carter Scott to come into her life—and to be so damn sexy, so distracting, and so determined to get close.

Carter isn’t looking for anything serious—his heart belongs to the kids who depend on his pediatric practice—but something about Regan makes him reconsider. Maybe it’s the scars she hides so well, the secrets she can’t share. Carter knows all about that kind of pain, and he wants to help. But offering Regan a job in his office only makes things worse, even if their chemistry is off the charts. Lucky for them both, Carter isn’t about to let go of love without a fight.

Juliette and Jase may be out of Dornan's immediate reach, but as tensions rise, will they end up walking right into the enemy's trap?

Can Juliette forgive Jase for his devastating betrayal, or will it destroy everything they've been fighting for?

When the Rancher Came to Town - Emma Cane
Welcome to Valentine Valley!
The Silver Creek Rodeo is in full swing, and everyone's talking about the rancher who came to town …

Bed-and-breakfast owner Amanda Cramer wants nothing more than a quiet, private life. Well, she wants guests too, but after suffering her share of unwanted notoriety, she's gotten comfortable hiding out in her inn … perhaps a little too comfortable. When her newest customer arrives—tall, dark, and breathtaking—Amanda begins to question her self-imposed exile.

Ex-rodeo star Mason Lopez knows all about the limelight. He'd avoid it if he could, but since one last ride could mean saving his family's ranch, he'll go all in. When he gets to Valentine Valley for the Silver Creek Rodeo, Mason checks into the Connections B&B and finds himself immediately drawn to the beautiful, reserved woman who owns it.

Mason has only three days in town … can he convince Amanda to open her heart to him and welcome the world back in?

Daring - Elliott James
THE WEREWOLVES HAVE A NEW LEADER...AND HE CANNOT BE STOPPED.

Something is rotten in the state of Wisconsin.

Werewolf packs are being united and absorbed into an army of super soldiers by a mysterious figure who speaks like an angel and fights like a demon. And every Knight Templar—keepers of the magical peace between mankind and magickind—who tries to get close to this big bad wolf winds up dead. No knight can infiltrate a group whose members can smell a human from a mile away...no knight except one.

John Charming. Ex knight. Current werewolf. Hunted by the men who trained him, he now might be their only salvation. But animal instincts are rising up to claim John more powerfully than ever before, and he must decide if this new leader of wolves is a madman...or a messiah.

DARING is the second novel in an urban fantasy series which gives a new twist to the Prince Charming tale.

Spanish Nights - Valerie Twombly
After a bitter divorce from her cheating husband, Makayla searches for her muse in the remote hills of Spain. When she flings open the door of her villa, she finds it in the form of intense blue eyes and a killer body attached to a thick Spanish accent.

Armand has lost everything. His magic and his freedom are taken when an evil curse is placed on the Jinn, bounding him to earth. With only his immortality and ability for seduction, he sets his sights on the dark haired newcomer in town.

What begins as desire in the steamy nights of Spain, quickly leads to something more meaningful. However, when evil emerges from the shadows, Makayla learns she must choose between her mortality and Armand’s freedom.

Again - Lisa Burstein
How far would you go for a second chance?

Eleven years after flunking out of college, Kate has finally hit rock-bottom. Losing her job and boyfriend in one drunken night, she’s determined to fix her life by going back to the moment when she let partying and sex take over. And do things right this time. At twenty-nine, she heads back to freshman year of college, with a catch.

Pretending she's nineteen with a new roommate and full class schedule is easy. When she meets her shy, sexy and seven-years-younger RA, Carter, following her self-imposed sobriety and celibacy rules is proving to be anything but.

A senior enduring years of regret, Carter is more than ready to graduate. He’s anxious to move on from the party his freshman year where he witnessed his frat brothers about to commit a sexual assault. Instead of doing the right thing and stepping in, he looked the other way and left. His guilt has made for a lonely four years.

When he meets the new freshman on his floor, spunky and confident Kate, he wonders if his time as an outcast has finally come to an end.

Kate and Carter’s growing friendship and undeniable attraction make it harder to hide the demons from their respective pasts. But when their secrets are finally revealed, will their chance at starting over together still be there?

Angela Carter just doesn't get sex. She's carefully structured every aspect of her life, but what goes on in the bedroom seems infuriatingly out of her control. Now, she needs a man to teach her how to let go and experience the sensual awakening she's always dreamed of and the only place to find such an expert is Club Ecstasy—the luxurious, confidential destination for pleasure.

Above all else, Brent Delaney is a professional—and more than capable in the bedroom. But when he meets Angela, he quickly discovers he's met his match. He has to get that powerful mind of hers to shut down and let more … savage … thoughts take over. As an expert, he's determined to break down this gorgeous woman's analytical walls. But this seduction is going to take some creativity …

Divinity - Michelle L. Johnson
When Julia climbs into a flaming car to save a trapped child, she's left wondering why either of them survived. Then she learns that her father is the Archangel Gabriel, and that she is half human, half Archangel. With guidance from Michael, the most powerful Archangel, Julia sets out to discover her own history and explore her angelic powers. But her journey is cut short when an evil force, invisible to human and angel alike, tears her world apart. Now Julia must fight through her despair, harness her newfound gifts, and risk her very soul to stop the A'nwel and protect the family she never knew she had. What she doesn't know is that Archangels have secrets too."
Posted by LilyElement at 12:00 AM