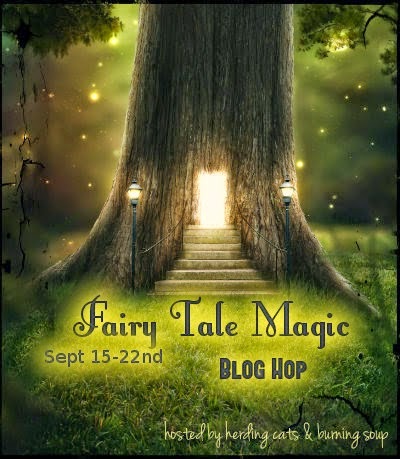 Melissa and I signed up for this sweet blog hop all about Fairy Tale Magic because, well, we love fairytales. We sing Disney tunes to each other and squee when we discover a new fairytale retelling, especially the naughty ones. Here are a few books we've reviewed that are fairytale related, ordered by newest review to oldest. Scroll for the giveaway!

This stunning debut captures the grotesque madness of a mystical under-land, as well as a girl’s pangs of first love and independence. Alyssa Gardner hears the whispers of bugs and flowers—precisely the affliction that landed her mother in a mental hospital years before. This family curse stretches back to her ancestor Alice Liddell, the real-life inspiration for Lewis Carroll’s Alice’s Adventures in Wonderland. Alyssa might be crazy, but she manages to keep it together. For now.

When her mother’s mental health takes a turn for the worse, Alyssa learns that what she thought was fiction is based in terrifying reality. The real Wonderland is a place far darker and more twisted than Lewis Carroll ever let on. There, Alyssa must pass a series of tests, including draining an ocean of Alice’s tears, waking the slumbering tea party, and subduing a vicious bandersnatch, to fix Alice’s mistakes and save her family. She must also decide whom to trust: Jeb, her gorgeous best friend and secret crush, or the sexy but suspicious Morpheus, her guide through Wonderland, who may have dark motives of his own.

This Duke is Mine
He is a duke in search of a perfect bride.

She is a lady—but a long way from perfect.


Tarquin, the powerful Duke of Sconce, knows perfectly well that the decorous and fashionably slender Georgiana Lytton will make him a proper duchess. So why can't he stop thinking about her twin sister, the curvy, headstrong, and altogether unconventional Olivia? Not only is Olivia betrothed to another man, but their improper, albeit intoxicating, flirtation makes her unsuitability all the more clear.

Determined to make a perfect match, he methodically cuts Olivia from his thoughts, allowing logic and duty to triumph over passion…Until, in his darkest hour, Quin begins to question whether perfection has anything to do with love.

To win Olivia's hand he would have to give up all the beliefs he holds most dear, and surrender heart, body and soul…

Unless it's already too late.

Don't miss a new version of The Princess & the Pea, asking an age-old question: What is a perfect princess?

Along came a spider…

When Trish Muffet is attacked at a grisly crime scene, the last person she expects to come to her rescue is Nicky “Little Boy” Blue. But since walking away from everything two years before, Nicky’s been doling out vigilante justice as “The Spider,” taking on the vicious predators of the night in hopes it’ll lead him to his ultimate target – Vlad Dracula. And he needs Trish’s help.

Although Nicky’s renegade style goes against everything Trish stands for, she’ll do what she must to bring Dracula down. With danger stalking her, Trish knows the only person she can count on is the one man who has the power to leave her breathless. There’s no way she’s letting this spider frighten her away…

Long ago there lived a beautiful child. Her name was Violet. Fair of skin, with blonde hair and large blue eyes. Born of wild magic, she was a woman with a child’s heart. Innocent and lovely, but not at all what she seemed--you see Violet went by another name: The Heartsong.

She was the child of fairy magic, the physical manifestation of all fae kinds unbridled power. Cosseted and pampered, she grew up in isolation, never knowing who she really was, or why there were those who’d seek to harm her.

Ewan of the Blackfoot Clan is a wolf with a problem. He’s been sent to kill the Heartsong, but the moment he lays eyes on the blonde beauty he knows he’ll defy the evil fae he works for to claim Violet as his own.

This is the tale of Little Red Riding Hood and the Big Bad Wolf, as it really happened...

A not so classic retelling of Beauty and the Beast, as seen through the eyes of the villain...

Betty Hart has had it with men. Jilted in love, her life now consists of shelving books by day, watching too much Anime by night, and occasionally dressing up like a superhero on the weekends with her fellow ‘Bleeding Heart’ nerds. Men are not welcome and very much unwanted. Especially the sexy Frenchman who saunters into her library reeking of alcohol and looking like he went one too many rounds in the ring.

Gerard Caron is in trouble. Again. Caught with his pants down (literally) he’s forced to seek asylum on Earth while his fairy godmother tries to keep Prince Charming from going all ‘Off with his head’. Maybe, messing around with the King’s daughter hadn’t been such a great idea after all, not that Gerard knew the silly redhead was a princess. But his fairy godmother knows the only way to save his life is to finally pair Gerard with his perfect mate, whether he’s willing or not.

From the moment Gerard lays eyes on the nerdy librarian he knows he must have her, but Betty is unlike any woman he’s ever known. He thought Betty would come as willingly to his bed as every other woman before her, but she is a woman who demands respect and even… horror of all horrors… love. Is it possible for a self-proclaimed Casanova to change his ways?

Alice is all grown up. Running the Mad Hatter's Cupcakery and Tea Shoppe is a delicious job, until fate--and a fairy godmother with a weakness for bad boys--throws her a curveball. Now, Alice is the newest resident of Wonderland, where the Mad Hatter fuels her fantasies and thrills her body with his dark touch.

The Mad Hatter may have a voice and a body made for sex, but he takes no lovers. Ever. But a determined fairy godmother has forced Alice into Wonderland--and his arms. Now, as desire and madness converge, the Hatter must decide if he will fight the fairy godmother's mating--or fight for Alice.

Imp, deceiver, villainous mastermind… Rumpelstiltskin’s been called all these names and more, and for the most part, they’re entirely true. But there is more to the brooding, blond haired Adonis than brokering deals for the devil. He’s hiding a terrible, hideous secret. One that threatens to fray the already delicate strands of his sanity and reason. A secret that he’s desperate to make right, to see whole again, and there is no one and nothing that will stand in his way of getting what he wants—no one except a slip of woman with hair like fire and skin like finest porcelain. Something about Shayera Caron calls to the beast inside him and makes him question his motives for the first time in his life.

Shayera Caron is the daughter of the infamous Gerard Caron, former lothario of Kingdom but now a reformed rake and settled husband and father. She can go nowhere in her tiny hamlet without seeing the sneers of women and hearing the murmurings of their disdain for the blood that runs through her veins. Shayera is desperate to get away from the gossiping hens, so when Rumpelstiltskin rides into town, she doesn’t think twice before going wherever he leads. Only thing is Shayera is not as innocent as she might seem, for she hides a secret too. One that will bring the most feared man in all of Kingdom to his knees…

* First published in the anthology, Alphas After Dark.


On to the giveaways! We will have one giveaway where the winner will be able to choose a book of their choice from the list above. If the winner chooses one of the first 3 Kingdom books, I'd suggest getting the freebie set and I will purchase one of the later books (in that series) of your choice as your prize.

Don't forget to enter the grand prize, it is a hop-wide giveaway for a $100 Amazon Gift Card. Good luck!

Don't forget to check out all the other blogs and their individual giveaways!