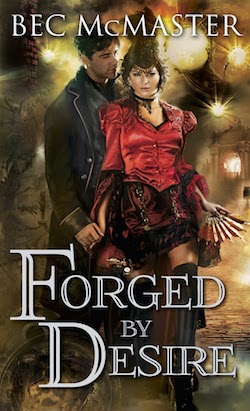 Perry has been hiding from her Echelon past to keep her father safe from a powerful duke with a more powerful grudge. Even her closest friend and partner in the Nighthawks, Garrett, doesn’t know that she is an Earl’s daughter. Though Garrett has to wonder given how easily she played the part at the opera. That night was the first time he’d seen her as more than his partner—seen her as a woman. Now he can’t get her out of his head. But with his craving virus at dangerous levels, he doesn’t trust himself around her. Perry’s past comes knocking and now Garrett is in its crosshairs.

Ms. McMaster’s steampunk Victorian London is every bit as awesome in this book as the other two I’ve read. I love the dark, gritty feel she imparts to her world and the stakes she’s built into it with The Fade, thrall contracts, and of course class distinction. Perry and Garrett are on different sides of that line and don’t care a bit about that.

Perry can hold her own among the elite Nighthawks, is their best tracker, and regularly spars with their former Guildmaster—she’s seriously kick ass. This is no damsel in distress. Garrett is just dominant enough to be seriously sexy and he’s entirely thoughtful, the kind of guy every gal should want to be with. This pair’s chemistry is smoking, their by-play fun, and their conflict believable. I didn’t have any teeth gnashing moments—everyone behaved in understandable ways.

I especially love the villain. There’s a wicked little part of me that adores when the bad guy wants to possess the heroine. Oh, I just eat that up! And it’s great in this book.

Old series’ favorites reappear to help Perry and Garrett but it’s not necessary for a new reader to have the earlier books under their belt to understand what’s going on (though I might not a good judge of that now since I’ve read two). For the record, this is probably my second favorite book in the series behind My Lady Quicksilver, but I’ve still got the first one to read, so we’ll see if it stays at that ranking :)

One last little gripe that’s a SPOILER: (select it to view the text)
Start Spoiler/
I’m sure there is a universe-related reason why this wasn’t possible, but I was disappointed Perry didn’t get to become a duchess. She owned the villain and totally deserves a spot on that Council.
/End Spoiler