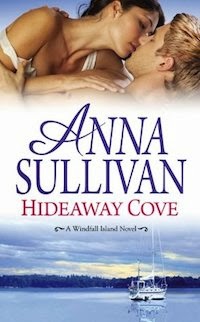 Left pregnant at sixteen, Jessie swears off men forever. Now the most important thing in this struggling single mom’s life is her son Benji. But eight years of being loveless and sexless is taking its toll on her. Especially with the arrival of sexy southerner Holden. Hold is working on a mystery only genealogy can solve—the identity of the missing Stanhope heir. He’s not averse to having a little fun while he does it. Jessi has been on his mind since he arrived on Windfall Island and spotted her bustling around at the airport. The more he has to work to get her attention, the more he wants to keep it. He didn’t bargain on falling for her son as well. So when Jessie’s ex turns up wanting a piece of the family action, Hold has to evaluate why he’s so angry if it’s only a little fun. And if he can trust Jessie enough to tell her about his family’s wealth.

This is the follow-up to Temptation Bay in the Windfall Island series. While you can pick this one up and have a satisfying read, you’re going to be missing out on why you should care about some of the secondary characters (Maggie, Dex, George, & Paige).

About this Hideaway Cove, the love plot is satisfying. Both characters are believable with interesting back-stories. They aren’t excessively stubborn. The romance flows fairly naturally. It’s not rushed nor are the arrival of the love scenes.

The plot in general is also believable and exciting at times, complete with a high-class charity ball and a car chase. That said, chances are you’re not going to be surprised by the outcome at the end (or any of the twists).

The mystery on the Stanhope heir identity is still unanswered at the end of Hideaway Cove. Clearly that’s the series’ plot. Even though we’re left with that cliffhanger (again), this book has a satisfying resolution overall (although I knew I wouldn’t get an answer on the Stanhope plot, so I was ready for that).

The nice thing about this novel and the first book is that we’re presented with heroines who really need money but aren’t willing to accept any if they haven’t earned it. That doesn’t stop someone from trying to kill them anyway.

What you need to know: the love scenes are slightly fade-to-black. If you’re big into the go-all-the-way, super-hot type love scenes, this book will leave you a little unsatisfied.

Grab this one if you like single moms who work for what they have and the southern gentlemen who want them (and their adorable kids).
Posted by Unknown at 12:00 AM