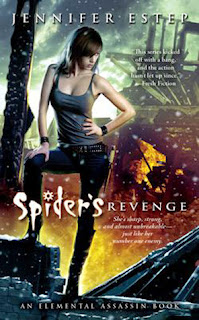 Gin Blanco, aka The Spider, returns in book five of the Elemental Assassin series, Spider's Revenge. The main purpose of this book is going after the fire elemental, Mab Monroe. In the previous book, she was toying with Mab. I knew she would have to deal with her once and for all and it was going to be a big battle. I wasn't let down, the face off was years in the making. Mab was the one who murdered Gin's mother and sister when she was just a child. She also tortured Gin, and left her mark on her by burning a spider medallion into her hands.

Gin has a lot to lose if she doesn't manage to kill Mab. Since the beginning of the series, she has slowly been putting down roots and caring for people. Finally reconnecting with her long lost sister, Bria she can't afford to lose her now. Add in that Gin and Owen are moving to the next level, they're being honest and accepting each other for who they are. She can't afford to make any mistakes.

I really enjoyed Spider's Revenge. It was a pretty intense read, that had me wondering if Gin would be able to pull it off without getting herself killed in the process. I highly recommend the Elemental Assassin series, and I will be listening to the next audiobook in the very near future. If you're not a fan of audiobooks, I'd recommend trying out this series. I was never fond of audiobooks until I ran across this one.
Posted by LilyElement at 12:00 AM