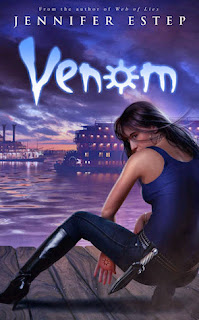 Gin Blanco, a retired assassin named the Spider, returns in book three of the Elemental Assassin series. This time around, she's dealing with the consequences of her actions in book two. With a giant obsessing after a mutual friend, Gin is going to have to give it everything she has in order to save her friend and not expose herself all while somehow living to tell the tale. Add in that Gin's little sister that she thought died when she was a child somehow pops back into her life and this story just got that much more twisted.

The love interest, Owen Grayson had me pushing aside my intrigue/anger of Donovan Caine and rooting for Owen. I have mixed feelings for Donovan at this point, and I'm hoping he stays out of the picture. I'm almost certain JEstep is going to bring him back later on just to f*** with us though so we'll cross that bridge when we get to it. Owen seems like Gin could rely on him for support as well as comfort and I can't wait to see where there relationship goes in the future books.

Jennifer Estep manages to weave such an intricate story that you're not sure where it's going to go, you just know you want to get caught in her web. The Elemental Assassin series is everything I could ask for in an Urban Fantasy series. I highly recommend it if you haven't read it yet! I'm already listening to the fourth book (audiobook) in the series.
Posted by LilyElement at 12:00 AM