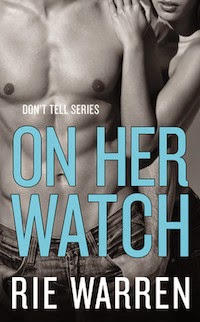 On Her Watch - Rie Warren
Release Date: June 3rd 2014
War is raging in the InterNations Territories and within Lieutenant Liz Grant’s heart.

AWOL from her post for several months, Liz is on a mission to infiltrate the Beta Corps military, desperate to find out who murdered her father and turn the revolution in the insurgents’ favor. Commander Linc Cutler stands in her way. Coldly handsome and in control, his desire for her causes a crack in her deep cover.

She’s certain he holds the key to her past as well as her future, but Linc has pledged his allegiance to the oppressive Company regime headed by his father. Through escalating intrigue, espionage, and runaway passion, Liz is thrust into an impossible situation.

Lives, the Revolution, love at stake, it all comes down to the one man Liz shouldn’t trust.

Pre-Order on: Amazon, Barnes and Noble

Why Drea is waiting:
I've read the first book in this series. It was my first M/M and it was amazing! The main character's voice was gritty and aggressive, and the sex scenes were scorching. This one is M/F, so I'm interested to see how it compares.
The author even sent us an excerpt, check it out:


My head swimming with conspiracies and factions and who-the-fuck-knew what else, I skipped my room once I returned to Corps Command. In no mood to clash bitch swords with Sabine, I headed straight for the showers, hoping a hot one would thaw my frozen toes and help me think.
With my head bent under the blasting spray, water sluiced over my tense shoulders and down my back. Right then Commander Linc barged in. I shouldn’t say barged—not this time. He was silent as a stealth weapon. Deadly as a drone Predator too.
He drew up quick with a rough curse. “Fuck, Liz.”
My head whipped beyond him to the bank of mirrors, where I saw myself as he did: a long, sleek body taut with lean muscle. Finding his eyes, I drowned in his devouring gaze and turned around under the shower’s spray. He locked sights on my sex. My thighs pressed together, slick lips swelling under his hungry regard.
“Do you always conduct Beta business in the locker room, or is it just me you’re stalking, sir?”
Jaw ticking, he strafed closer. “I came for a report.”
“Here’s a report.” I flicked water down my navel. “The water’s hot.”
Breath ragged, he caged both arms on the shower’s open sides. “Woman, I am so close to coming right now.”
“Care to join me?” Under my touch, my nipples drew even more erect. I liked breaking Linc down, testing him, tempting him. I needed the man in a state of mindless desire. Since seeing his key card laid out in his room earlier, I’d been forming a plan. Now was as good a time as any to implement it.
“Maybe you should get out.”
“Maybe you should sit down before you fall over, sir.”
He shrugged off his holsters and reached into the shower. Calloused palms slipped over the suds pouring down my body until he scraped across my nipples. The aroused buds in his hands felt so good.
“Yes,” I whispered, writhing beneath his firm touch. Too good.
“I want to suck on you until you scream, sweetheart.”
There was none of the softness in his words that had started our sensual kiss at the sex club, and there certainly wasn’t any of the empathetic connection from our breakfast of truths. This was filthy-hot, on-fire, totally unstoppable wanting.
“I thought we were forgetting about what happened at the Club.”
His possessive kiss stormed my defenses, his tongue cruising past my lips, thrusting in time to his groin against me. “This has nothing to do with the Club or those people. You keep tempting me beyond my control, Liz, and I won’t be able to stop myself.”
Compelling attraction snared us together in a moist embrace until I withdrew from his mouth, flipping off the shower. Brushing past him, I slung a towel around myself.
Linc fingered the edge where it knotted between my breasts. “What did you find out today?”
Besides the fact we can’t keep our hands off each other? “Sector Four was all clear.” Technically a small lie because the Posse factory and barracks were situated in S-5.
“Anything else?” Fingers tugged open the towel’s drapes, finding my waist. His thumb rubbed my hip.
I gasped, “No, sir.”
“I like the way you say sir.” His meandering thumb rolled up to my nipple, stroking back and forth.
I leaned in to his caress. “I like the way you touch me.”
My eyes skated down his chest to his pelvis, and I moaned. He filled out the uniform pants, a solid cock straining against the blue fabric. A small part of me was weirded out—it was almost like eye-fucking Cannon’s man, with Linc and Nate being twins. But whereas Nate was a soft touch, Linc was hard. So, so hard.
The halos, constantly fizzing with the unsteady electrical grid, blinkered off. I stumbled forward in the sudden darkness, catching myself on…Oh my God.
Linc grunted, shifted. That wasn’t his weapon in my hand, but it was hot as freshly fired metal, rigid as a gun barrel. The weight and heat of him in my palm made me want to push my hand into his pants and feel that naked cock. Fingers snapped around my wrist. Linc pulled my hand slowly down his length, my fingers fully engaged with his flesh. And he was big. If Nate was packing the same, no wonder Cannon walked so…stiffly.
The halos came back to life. I snatched my arm away, my eyes wide. Linc’s cheeks were flushed, his lip narrowly curled off his teeth. My palm was on fire from the feel of him. I waved it around in front of me, an added distraction to the dark-out move I’d pulled while I’d cupped him.
“Was touching me that bad?” He sneered.
“Next time I want a gun in my hand, I’ll go for my Eagle.”
“Good idea.” Spinning around, Linc banged out of the locker room. I had no idea how the man managed to march with that cannon between his thighs.


What book are you waiting on this week?
Posted by Unknown at 12:00 AM