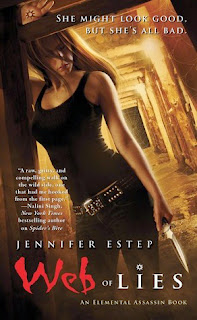 I'll start this review by saying that I am not an audiobook lover. I purchased book one (Spider's Bite) in this series as an audiobook and somehow fell in love. I'm almost certain it's how well the narrator channels the characters, I'm enjoying everything about it. I'll be purchasing the rest of the series in audiobook format as long as Lauren Fortgang is the narrator.

Gin Blanco returns in book two of the Elemental Assassin series, Web of Lies. Retired, she no longer is killing people for money, and is instead running the Pork Pit, a BBQ restaurant that her former handler owned. I wasn't sure what to expect this time around since book one left off where she went on vacation and was giving up her life of being an assassin. Though I should have known not to worry since trouble seems to follow Gin.

Two would be robbers attempt to steal the cash from her register one night and foolishly take one of her customers hostage. After that matter is resolved Gin is approached by a college girl that has someone attempting to kill her. Toss in some prostitutes, a new sexy love interest, and some crazy people with strong powers and you have a story that kept me wondering what the heck would happen next. I highly recommend this series if you're a fan of Urban Fantasy with a strong female main character.
Posted by LilyElement at 12:00 AM