Drea's Review: Venice in the Moonlight 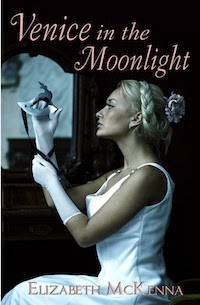 I received this book via the author in exchange for an honest review.

Despondent from his wife’s death, Marietta’s father marries her off to the first willing wealthy man. 15-year-old Marietta discovers her new husband an abusive lecher with an interest in teenage girls. So when he dies from a bad batch of lamb four years later, she’s not terribly upset. But making her way on her own is scary, especially when she discovers her father is dead…and may have been murdered. A broken axel throws Marietta into another wealthy lech's company. Nico confounds Marietta with his sweet behavior on one hand and playboy ways on the other. But soon she discovers he’s nothing like her dead husband.

I had a hard time getting into this story. I found Marietta a bit unsympathetic at the beginning, partially because the reader is only told how bad the husband was rather than being shown it. We see only that he flirts with a maid and eats lamb unattractively. The mother-in-law was the villain for me rather than the husband. So I found Marietta’s behavior toward the husband’s corpse a bit unforgivable. Perhaps if we'd been shown his horror instead of witnessing only his lechery, it would have been easier to swallow.

Once Marietta begins her detective work, and runs into the hero Nico at every turn, the story is much better. She’s more sympathetic at that point (though she is still doing some questionable things to further her ends). Nico is a decent hero. Without him, I don’t think I’d have kept reading because the mystery of her father’s death didn’t engage me.
Posted by Unknown at 8:00 AM