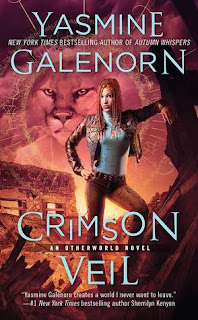 We’re the D’Artigo sisters: savvy half-human, half-Fae ex-operatives for the Otherworld Intelligence Agency. My sister Camille is a wicked good witch with three gorgeous husbands. Delilah is a two-faced werecat and a Death Maiden. And me? I’m Menolly, a vampire married to a scorching hot werepuma. And right now, we’re facing enemies on all sides…

It’s been a long and devastating week. Back in Otherworld, war has decimated the elfin city of Elqaneve, our father has gone missing, and Shadow Wing has managed to obtain another spirit seal. On the home front, somebody burned down my bar, the Wayfarer, killing eight people, including a friend.

To make matters worse, we still haven’t found a way to stop Lowestar Radcliff—the daemon in charge of a supernatural corporate power grab. He’s attempting to awaken Suvika, the lord of vice and corrupt businessmen, and we have to stop him. Our enemies are closing in on all sides, and this time, there’s no place to hide.


Why I'm waiting:
I adore the Otherworld series by Yasmine Galenorn! I think one of the best parts of this series is that it's told in a round robin style. Each book's main character alternating between the three sisters, this one is about Menolly.

What book are you waiting for this week?
Posted by LilyElement at 12:00 AM