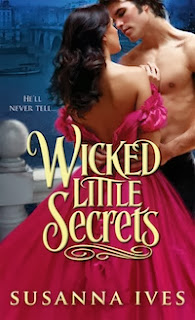 
Vivienne’s family is in trouble. Her father is in danger of being sent to the poor house. Their only hope is for her to make a good match in wealthy prig John. But John is as disappointed in her as her father is. She has her work cut out for her. Vivienne discovers her beloved aunt is being blackmailed. She needs to help her aunt before she starts her new life. Vivienne’s neighbor and childhood friend Viscount Dashiell can help. But this rake can’t do it without getting a bit tangled with Vivienne—the only female he refuses to hurt. Dash could be the solution to all her problems if only he’d take the chance.

I enjoyed the heroine and hero in this novel. There was emotional growth on both their parts, albeit sometimes slow growth. They had believable history and affection that had me rooting for them. There were also loads of wicked secrets in this novel, and I wouldn’t call them little. Though I had some inkling what they were, I didn’t guess the majority of them. It’s hard to put one over on me, so that’s great! And in terms of writing, this is well written. Since this is a traditionally published book, and I wasn't absolutely wowed, I give it 4*.