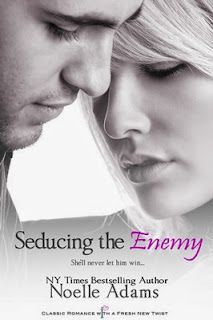 After being injured in a tragic accident as a child, Marietta Edwards has lived a sheltered life. Finally recovered, she wants to indulge in pleasures that are entirely new to her, so she begins by seducing a sexy, mysterious stranger. Only after their one-night stand does she learn their families have been embroiled in a fifteen-year legal battle and the man she’s given herself to is her worst enemy.

The heir to a vast fortune, Harrison Damon believes the unforgettable night he spent with Marietta in Monte Carlo is just a fling, an escape from his responsibilities. Then he discovers she is an Edwards—the family he despises most. He can’t quench his attraction for her, but he won’t let her use it against him. He won’t let her manipulate him to win money from his family. No matter how much he wants her, he won’t let her seduce him again. 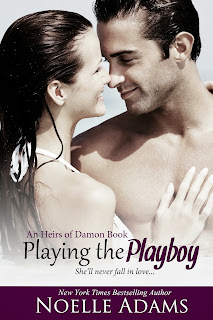 Laurel will do anything to save her Santorini inn from the powerful Damon family, and that includes manipulating Andrew Damon, the man they’ve sent to get her off the property.  Andrew might have a reputation for being irresistible to women, but she won’t have any problem resisting him. This is war, after all, and the Damons drew their weapons first.

Andrew has spent most of his life chasing women and wasting time, but he’s determined to do his duty by his family, even if that means ousting an infuriating (and gorgeous) widow from the inn that legally belongs to the Damons.  He doesn’t expect to fall for her. And he definitely doesn’t expect to discover that he’s been played.


ABOUT THE AUTHOR:
Noelle handwrote her first romance novel in a spiral-bound notebook when she was twelve, and she hasn’t stopped writing since. She has lived in eight different states and currently resides in Virginia, where she teaches English, reads any book she can get her hands on, and offers tribute to a very spoiled cocker spaniel.

She loves travel, art, history, and ice cream. After spending far too many years of her life in graduate school, she has decided to reorient her priorities and focus on writing contemporary romances.


TOUR GIVEAWAY:
Noelle is giving away the following prizes at the end of her tour:

GRAND PRIZE:   $25 gift card to Amazon or B&N and a custom Heirs of Damon mouse pad.

RUNNERS-UP:  Three runners-up will receive an eBook of PLAYING THE PLAYBOY