Hi everyone! I've been in the rock star type of mood lately and can't pass up the Brothers of Rock series. I have the awesome Karolyn James on the blog today to tell us what her favorite things are about Christmas. Also, enter the giveaway (2 winners) at the bottom for a chance to win an ebook copy of Last Song.

There are 5 books in the series right now and each one looks awesome. If you're a Kindle user, grab All Access via kindle for free! 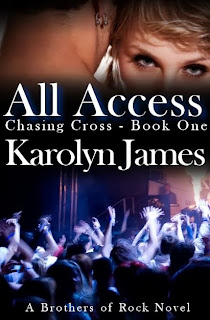 With ALL ACCESS, a contemporary romance series begins that explores, life, love, and music. Join the five band members of Chasing Cross as they find that there's more to life beyond the stage.

BOOK DESCRIPTION:
Jess is caught off guard when a sexy stranger buys her a cup of coffee and asks her to sit with him. He's mysterious, nice, and even though he says the right things at the right time, Jess can sense that there's something hidden about him.

As Johnnie sits across from the beautiful woman, he can't believe she doesn't recognize him. Everyone does. It comes with the territory when you're the lead singer of one of the hottest bands in the world, Chasing Cross. With one more show to go before taking a small break in touring, it feels like luck is on Johnnie's side. That is, if he can find a way to tell Jess who he is, without scaring her off.

After her best friend begs her to come to a concert, Jess finds herself standing in the middle of a crowd. The lights are off, music begins, and the crowd erupts in cheers. She doesn't know much about the band, but that's all about to change. When the lights come on, Jess can't believe her eyes. The lead singer of the band is the man from the café.

Plucked from the crowd during the show, Jess makes her way backstage. The encore may have ended on stage, but the real show is just about to begin. Johnnie's passion quickly turns to romance but the more time he and Jess spend together, the more things get complicated. Johnnie has a big decision to make about himself and the band, testing his loyalty and love for the music, and when Jess's dreams start to come true, she starts to realize that true love exists, but it's not always an easy path to take. 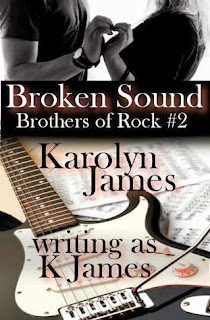 The second book in the Brothers of Rock series is BROKEN SOUND, where lead guitarist, Davey, is faced with life changing decisions involving love, family, and as always, music.

Rockstars expect women to show up at their hotel room, but when a woman shows up with an infant and tells Davey he is the father, his world is turned upside down.

Anna is a teacher and part-time waitress, desperate to make enough to pay off debts left to her by an ex-boyfriend who made her life a living hell. When her boss schedules her for an extra shift, he tells her it's her job to take care of a special guest... lead guitarist of Chasing Cross, Davey. The second Anna meets eyes with Davey, she feels something she's wanted for a long time. But with someone famous? That's impossible. Besides, Davey is there with a date.

When Davey returns to the restaurant, sans date, he asks to see Anna. She doesn't understand what he would want with her. He is a man with a big heart, kind eyes, and the true power that only a real rockstar could have. Then Anna learns the truth of Davey's life, from his haunted past to his rocky present. Still, she longs to be part of his future.  But when Anna's own past turns potentially deadly, life and love suddenly collide in a way that could hurt everyone and leave someone dead. 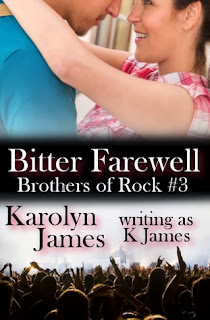 Book three in the Brothers of Rock series - BITTER FAREWELL

When Danny boards the private jet for his father's funeral, he knows he isn't just going back home to settle the estate.

He is going to back to find her... the girl who loved him, the girl who understood his family problems, and the girl he left behind to chase his dream of becoming a rockstar.

Liv Cryers is stuck in Bakersville. Literally. She came back hoping to find peace inside her empty heart, but now she's forced to care for her ailing father who doesn't remember her most days. She's tired of being forgotten. The sounds of her past seem so far away...

When rockstars come to town, crazy things can happen... 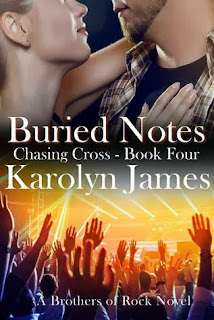 The next book in the Brothers of Rock series - BURIED NOTES

Finally exposing a secret to his band after years of hiding, Chasing Cross bassist, Chris, confesses that some years ago, during a wild night, he ended up marrying someone. It was supposed to be a no-big-deal kind of thing, with a stipulation... if one of them fell in love or wanted to get married to someone else, they would divorce.

Chris has been served divorce papers, and it should be easy to just sign them, but he can't. His heart won't allow it.

Becky loses her mother to breast cancer and realizes that life sometimes really is too short. She finds the ring she received from a sexy rockstar the night she secretly married him. The memory should have been fun, but after being pushed into a corner to stay married while that rockstar's band took off, Becky can't do it anymore.

In a journey that forces Chris to step back in time to find his future, he knows he needs to find Becky - his wife. He isn't sure what he'll find, but he knows he wants the truth.

Was it love back then? Or just a crazy night with a rockstar? 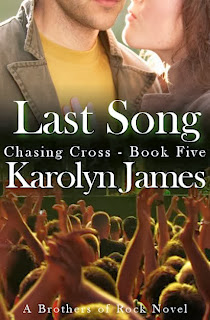 The fifth Brothers of Rock novel featuring Chasing Cross finds drummer Rick Saunderst living in a personal hell. After walking away from Chasing Cross in the middle of their tour, he tries everything he can to settle the demons in his soul, but the all night parties, booze, women, and jam sessions cannot silence the voice deep within...

Sarah is a small town veterinarian, not quite sure where her life is going. She walks her opinionated dog and lives her life in a simple routine. When a moving truck disrupts her quiet street, she must learn to accept her new neighbor's noisy habits and sexy stare.

For the first time ever, booze can't mask his feelings. After over a decade of the rockstar life, Rick finally feels like he has a life off stage. Jamming in a garage with old friends and getting to know Sarah, and her loyal dog, Molly, is his definition of home.

The rest of Chasing Cross continue the tour, with help from Fallen Tuesday’s lead singer, Luke, as their replacement drummer. He brings life back to the band, but even still, without Rick, the band feels incomplete.

In the final book featuring Chasing Cross, choices will come to a head. Chasing Cross must decide whether to move on without Rick and Rick must settle his own battles, personally and professionally. Falling in love wasn’t part of the deal, but sometimes love happens when a person least expects it.

Giveaway:
Karolyn James is giving away 2 ebook copies of Last Song (Chasing Cross Book Five) (A Brothers of Rock Novel)
The giveaways ends on 12/29/13 at 11:59PM. The two winners email addresses will be sent to the author so an ebook copy can be provided.
a Rafflecopter giveaway
Posted by LilyElement at 12:00 AM