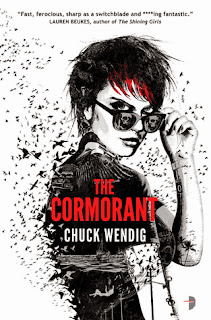 
Miriam is on the road again, having transitioned from "thief" to "killer".

Hired by a wealthy businessman, she heads down to Florida to practice the one thing she's good at, but in her vision she sees him die by another's hand and on the wall written in blood is a message just for Miriam.

Miriam Black is a series I read along with Braine of TalkSupe. We both love Chuck Wendig's world building, unique characters and story in general. It's very Stephen King-ish in a weird, creepy way with a heroine who can tell to the detail how and when you're going to die with a single touch. That ability is sure to fluck up anybody and Miriam Black is definitely one messed up anti-heroine.

THE CORMORANT is book three of the series and it is far from drying up. This is a reunion volume because Miriam goes head to head against a pal she met in Blackbirds and after two books, we finally meet Miriam's mother who she claimed messed her up royally. Aside from the personal angle of THE CORMORANT, Miriam's powers is morphing into something else and the world of supernatural beings like herself seems to be growing. We're slowly learning where Miriam's gift is coming from and a glimpse of what role she's playing in the big scheme of things.

Overall Braine and I give THE CORMORANT 5 cauldrons/stars. This is one of the best Urban Fantasy series out there and we highly recommend it to fans of the genre as well as readers who like horror, thrillers and suspense. Miriam Black reads like a movie too and that's a great incentive for any book to have.

BRAINE: There are so many things in THE CORMORANT that had happened, so many developments I don't know where to begin! I honestly didn't read the blurb, I just added it to my TBR and requested for an ARC as soon as I saw it on NG. I have no idea where the story is going, all I know is it's going to be a winner. So overall, how do you feel about THE CORMORANT?

MELISSA: I wasn't sure what to expect this time, but I should have known Chuck Wendig wouldn't let us down. I loved it, Miriam's foul mouth and brutal honesty is always a treat.

BRAINE: Oh man! I can't help but laugh and be amazed by her comebacks! That girl has a quick tongue and a sharp mind! What was your favorite foul mouth line from her? Mine is:

I hope she gets bedbugs in her vagina. And they lay eggs. And she becomes the Mother of Bedbugs.

The visual of bedbugs crawling out of a woman's vagina is disturbing and hilarious at the same time.

MELISSA: I'd have to say one of mine was when she was talking to a guy eating a Luna bar and told him

Your man-boobs are going to grow lush and full of milk.

It made me chuckle because I know she tries to get reactions from people and most of the time they either ignore or get pissed off.

BRAINE: Miriam is no heroine and Chuck Wendig calls her an anti-hero and rightfully so. Her moral compass is skewed and her choices are limited to picking the lesser of two evils. I'm not surprised by with her character development although I'm shocked and a little disturbed with how her powers are growing.

MELISSA: I think you hit the nail on the head with that one, the options she has to choose from are not ideal but she has to choose. It's been awhile since we read book two, but I feel like she's changed a lot and is trying to be a slightly more mature Miriam. She's getting over the past and realizing things she assumed were true weren't quite how she believed. Her powers are growing and I'm kind of wondering where it's going to go. I feel like this time around we're left with more questions than answers on that aspect, which makes me want book four right now!

BRAINE: I agree 100%. That last bit where her powers just went ZOOM had my jaw dropping on the floor. I won't be surprised if she starts growing feathers and a beak next time around. Her powers went cray-cray here, makes me nervous a bit. Miriam may have this tough persona but she's very vulnerable and I know she'll be psychoanalyzing herself after this.

Thanks for the head's up about the villain btw. You're right, he's not as sinister as the others but dangerous nonetheless and a little slick, difficult to pin down. I'm happy that loose end got tied permanently though. What I find interesting is his powers and the implied thought that Miriam and other "gifted" people like herself are puppets of some sort. What do you think about all this higher power thing?

MELISSA: I'm hesitantly digging the higher power thing for right now, but I'm sure we'll learn more in book four, Thunderbird. I'm liking the fact that Miriam is finding more people with powers, while it's not shedding a ton of light on hers, it's leaving me really intrigued.

BRAINE: People with powers are cool but scary at the same time. I like how Miriam is this unique creature amongst monsters. Adding more people like her is going to change that dynamic and I'm not sure if I like that. I mean I'm sure CWendig isn't going to disappoint but still I'm still getting a kick out of these weird nemesis Miriam seems to keep crossing paths with.

The conflict had that back-to-basics thing going on for it. The kicker goes back to more people like Miriam. I just love the chase, the villain is slippery slick. Aside from that, I still like the conflict in Mockingbird better.

MELISSA: I think you're right on that, and I agree with liking the conflict in Mockingbird better. CWendig probably didn't want to punch our eyeballs with the over the top intense villain + more people with powers so he toned it down a bit while still making us want the villain dead.

BRAINE: I've always been curious about Miriam's family. One can't be messed up like that without some serious history and we got a peek of that in Mockingbird. Here we finally meet her mom and honestly she surprised me. I was expecting this deplorable mother and an overall horrible human being. I ended up liking her. Miriam got her spunk from her mom.

MELISSA: I thought her mom was going to be a horrible lady as well! I'm thinking Miriam being more mature or the fact that Miriam was gone from her Mom's life for that long caused one or both of them to be kinder to one another.

BRAINE: I miss Louis! His phantom doesn't quite cut it for me. I still want the real thing!

MELISSA: I miss Louis too! I got so used to his character being present in the books that I associate the two together.

BRAINE:  Would you let Miriam touch and tell you what she saw?

MELISSA: I totally would, as long as she made up a story if she saw cancer as my cause of death. Would you?

BRAINE: I think I would let her touch me too granted she'll be honest and won't tell me some BS thing.

So what are your overall thoughts about THE CORMORANT?

MELISSA: My overall thoughts would be it's a fucked up thrill ride as usual, though a little tamer than the previous installments. I was left with quite a few questions which I hope we will find out more details in book 4, Thunderbird. 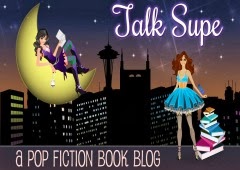 Blog | @talksupeblog | Facebook | Goodreads
Posted by LilyElement at 12:00 AM