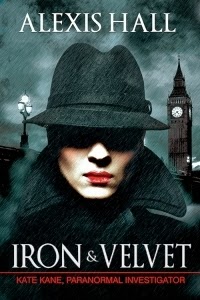 
P.I. Kate Kane is in a bad way. Her partner’s dead, she’s nearly out of booze, and the bill collectors are hounding her. Against her better judgment she accepts a job solving a murder on the dreaded vampires’ turf. That vampire happens to be a hot chick Kate knows is exactly the wrong sort for her (and thus exactly the sort she digs). One thing leads to six others and bam, Kate is stuck in the middle of monster politics with a brand new hot vampire girlfriend who despite her age, needs plenty of protecting.


From the book cover, I thought this would be a period book. It’s not. But that doesn’t detract from the story in the slightest.

Kate is a flawed and witty heroine. Her quips had me laughing from the very start of the book straight through to the end. And the characters surrounding her are each brilliant in their own way. This debut series has magic, mayhem, and sexy times. With so many different supernatural creatures in Kate's world, one might think it would be too much but the author makes it work superbly. There's no scrimping on conflict, action, or a satisfying ending. I can’t wait for the next installment in the Kate Kane, Paranormal Investigator series. Too bad this one hasn't even released yet. *taps her nails on the desk and waits*

I give it 5 stars and a few pieces of fancy chocolate ;)
Posted by Unknown at 8:00 AM