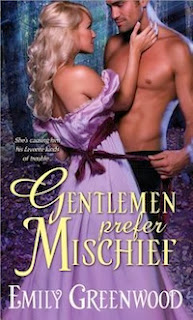 
Lily Teagarden’s future is in jeopardy thanks to the Woods Fiend her absent neighbor hasn’t bothered to deal with. So when Lord Roxham returns, Lily demands he ferret out the truth. Too late she discovers the fiend is a friend in need. Now Lily must protect him against the very man she’s set upon him. That means distraction and spirited games of one-upmanship. What neither Roxham nor Lily counted on was that two seemingly opposite people might be perfect for each other.

It’s been a few months since I’ve been able to get lost in a Regency romance, and this was the perfect one for me to pick up. Lily is mostly relatable despite the period, and Hal is a sexy hero. Their sparring kept me turning the pages. And most importantly, the love scenes were steamy ;)

Why didn't it get 5? The middle dragged on a little long for my taste and there were some writing style things I disliked. (Re: writing style—so much was in this format “the sleeve of his coat” instead of “his coat’s sleeve”)