Welcome to the Family Magic Birthday Extravaganza! Family Magic, the first book in Patti Larsen’s epic 20-book Hayle Coven young adult series, is having its second anniversary–and we’re bringing the magic, fun, and awesomeness to this birthday celebration!
Join author Patti Larsen and Badass Marketing for a week of fun, contests, giveaways, never-before-shared deleted scenes, and a kick-ass scavenger hunt that will have you looking for magic in unexpected places!
Check out where the party's happening right here!

Hi. Um… yeah. I’m Syd Hayle. Sydlynn. I know, weird name, right? My mother hates me, clearly. It gets worse. Translated from Aramaic, it means “Child of the Demon”. Um-hum. Because my dad is one. Mom thinks she’s so clever. Off topic, I know. You wanted the inside on Patti Larsen. How we met, and all that stuff. Okay, well… she was looking for a book to write and I was looking for someone to write my story, so it seemed like a good fit. I woke her up in the middle of the night—wow, is she cranky when you wake her up! Seriously—and told her she’d better trot off to her office. Write some stuff down before I forgot some of the details I wanted her to know. She actually did. Amazing. Anyway, we’ve been kind of bonded at the hip ever since. She thought naming the first book Family Magic was really clever. And, well, it is. She’s good at naming things. I think she was a little surprised to find how loud I could be when I wanted something. Even sold her business and started writing my stuff full time less than a year after we met. Okay, I take the blame for her diving in with both feet. I wouldn’t leave her alone. But at least it’s worked out for her so far. She really needs to learn to trust me. Considering I still won’t leave her alone, I think she’s getting the point. She thought there were only five books in my series. Snort. Try twenty, crazy lady. Some personal stuff about her? Well, she eats way too much chocolate and doesn’t share. Kind of mean, if you ask me. Is way too hard on herself, but we have that in common, so I’ll give her a pass. Likes cats—a LOT—and since one of my closest friends is a demon boy trapped in the body of a silver Persian, I guess I’m with her on that. She’s actually a pretty good writer. Fast, too. Gets teased she sold her soul to a demon. Considering I’m part demon, well… you can blame me for her speed, I guess. All in all, I we get on pretty good. Though when she writes books about other people in between mine, I get a little antsy. As in, “poke, prod, what were you thinking?” antsy. I know she needs a break from me now and then—the feeling is mutual—but sometimes I wonder if our little partnership will ever end. We’ll see. I’m sure we’ll get sick of each other eventually. Until then, I just try to be patient. Did I mention I don’t do patient? 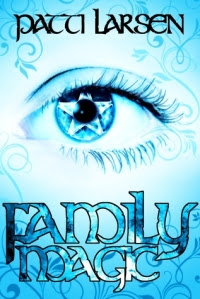 Her mom's a witch. Her dad's a demon. And she just wants to be ordinary. I batted at the curl of smoke drifting off the tip of my candle and tried not to sneeze. My heavy velvet cloak fell in oppressive, suffocating folds in the closed space of the ceremony chamber, the cowl trapping the annoying bits of puff I missed. I hated the way my eyes burned and teared, an almost constant distraction. Not that I didn't welcome the distraction, to be honest. Anything to take my mind from what went on around me. Being part of a demon raising is way less exciting than it sounds. Sydlynn Hayle's life couldn't be more complicated. Trying to please her coven, starting over in a new town, and fending off a bully cheerleader who hates her are just the beginning of her troubles. What to do when delicious football hero Brad Peters--boyfriend of her cheer nemesis--shows interest? If only the darkly yummy witch, Quaid Moromond, didn't make it so difficult for her to focus on fitting in with the normal kids. Add to that her crazy grandmother's constant escapes driving her family to the brink and Syd's between a rock and a coven site. Forced to take on power she doesn't want to protect a coven who blames her for everything, only she can save her family's magic. If her family's distrust doesn't destroy her first. Find Family Magic on Amazon, Barnes & Noble, and Smashwords. Connect with Patti Larsen on her website, Facebook, and Twitter.