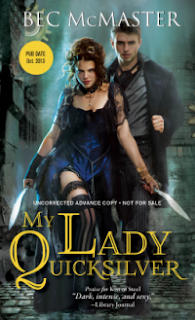 
In a steampunk version of Victorian London filled with blue blood-like vampires, werewolves, and humans with mechanical enhancements, rebels intent on bringing down the established Echelon blow up an important Echelon building. As a rebel leader herself—the feared Mercury—Rosalind Fairchild wishes she’d thought of the idea first…but if she had, no one would have been caught. Least of all her little brother. Now she must halt her own plans to bring down the oppressive regime to get him back.

Sir Jasper Lynch has a short time to capture the rebel Mercury before he loses his head, literally. He doesn't count on discovering Mercury is female and dangerously seductive. And when an out-spoken female named Rosa applies for the position as his secretary, he’s distracted beyond reason. How can he have a fierce attraction for two females, at the same time, after so long feeling nothing?

The sensuality in this story grabs you early and doesn't let up. There’s just the right amount of action, intrigue, and sexy time for my taste. Even though I came into this series on book three, I didn't find the back-story to be too overwhelming. There are bits that had me glossing over and moving on, but for the most part it wasn’t confusing. The author has created an interesting universe with loads of conflict for her wonderful characters. And these two had me turning the page faster and faster. I’ll definitely be reading more from her.
Posted by Unknown at 8:00 AM