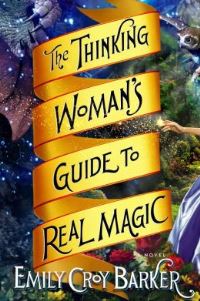 
Unlucky in love, English grad student Nora wanders into a different world and becomes the equivalent of a fairy princess. But all is not rosy in her fairy kingdom. Her gorgeous prince Raclin is actually a horrible beast--and Mama's boy (except Mama is worse than he is).

A chance meeting with the magician Aruendiel offers her safety but she doesn't accept it until it's almost too late. After spending months being Aruendiel's maid—and suffering with an obsession for him, she persuades him to teach her magic. Despite being from another world, she proves quite adept. And given enough time Nora could become a force to be reckoned with. Unfortunately, Raclin and his mama have other ideas...and a rare portal to her world won't be open for long...

After slogging through the slow, relatively annoying first 10 percent, the story began to get interesting when the magician rescued her. I read on, hoping for a satisfying ending to what was surely a romance. I barely got it. This is definitely not a category romance.  This story was written in the vein of romantic works like the Austen story mentioned often (Pride and Prejudice). I'm positive anyone reading this book will compare the two and find them similar.

Slight spoilers—the ending implies there's a happy for now, perhaps a happily ever after but we don't actually get it. In fact, the two never share so much as a kiss.

Had the beginning been easier to get through, the length shorter, and the ending more satisfying, I could have given the book a higher rating. As it stands, I give it three stars simply because it was engaging enough to keep me turning the pages.
Posted by Unknown at 8:00 AM