Review: In His Command 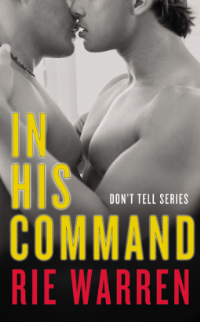 
In the year 2070, the Purge and Plague has wiped out most of mankind. Clustered in cities run by a despotic company, humans’ focus is on breeding. And anyone not breeding is judged, sentenced, and quickly executed. Caspar has skirted the CO’s  breeding requirements because he’s a military man but that all changes when he discovers the guy who went down on him last night is not only a Company CEO, but also his next mission.

This was my first M/M story. And it was a long one (over 90k). But the author’s voice (or rather Caspar’s voice), is so engaging that I couldn't read fast enough. So many other reviewers complained about Caspar’s blunt crassness. I adored it. This isn't a romance featuring women so the narrative shouldn't behave as if it is. This is a gay romance starring a battle-hardened, emotionally scarred military man in a dystopian world.

I will warn that you should not pick this up unless you’re prepared for copious amounts of explicit gay sex. There is a ton. I mean…a ton. Most were well-written—impressively so at times. Though occasionally I’d find myself trying to picture the acrobatics these two would have to do to accomplish what was mentioned. As far as the story, the world is creative and the conflict well crafted. I can’t say the outcome was surprising but even knowing what would happen didn't stop me from enjoying it when it did. There were many times I found myself laughing. And at the end I happily bawled.