Review: Along Came a Spider 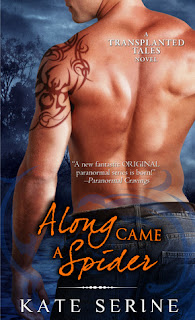 One spell gone awry transports a load of fairy tale powerhouses, rhyming characters, and literary figureheads from Make Believe to the Here and Now.

Little Miss Beatrice “Trish” Muffet is now all grown up and coming into her own as a member of the forensics team for the Fairytale Management Authority (FMA) based in Chicago. But she hasn’t forgotten the soulful moment she shared with Nicky Blue that fateful day so long ago. Nicky (of Little Boy Blue fame) has no idea she’s been carrying a torch for him for years. He’s on a vengeance mission to make his dead wife’s murderer pay. And he needs Trish’s help.

The writing was pretty solid in this book, the characters were great, and the love scenes were nicely handled. While this is the third book in the series, the author does a good job of bringing a brand new reader like me up to speed. The overall plot didn’t have me scratching my head. I also didn’t guess the outcome, so that’s great.

However, the general love premise bothered me. Nicky’s past with a variety of women (one of which was Trish’s mentor Red) despite his supposed feelings for Trish didn’t give me the warm fuzzies. I'd have been angry if I were Trish. If Nicky were really as hung up on her as is implied, I feel he’d have at least tried to persuade her to change her mind rather than staying away from her the entire time they'd been in the Here and Now. For this reason, and since this was marked as a romance, I can’t give it 5 stars.

That said I'll be reading the first and perhaps second books in this series.

I do have one question for the author though: When does Gideon get his own book? ;)
Posted by Unknown at 8:00 AM