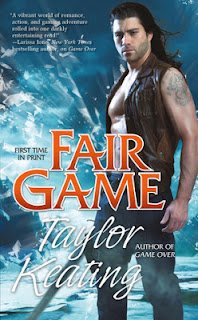 River Weston, a video game designer, uses her Fae magic to create a program that will benefit the demons and humans in a world that is recovering from a virus outbreak. The program, Hollow Man, allows people to create a hologram and protect themselves during battle. While I admit the idea of the program would be useful in real life, I think it would probably be abused if we had that type of technology. Some sort of checks and balances would have to be enforced, which luckily this book had.

Chase Hawkins (aka Hawk) is a Guardian who is dispatched with a team to strip Earth of destructive technology. In the Guardian's eyes, this will resolve everything by starting the world again with a clean slate. So when a mutated virus surfaces and starts affecting humans, everything goes crazy and Hawk and his teammates have to reevaluate their strategy. The virus is something out of horror stories - no one is really sure why it is affecting people at random, but it's Hawk and River's top priority to figure out what is causing it.

Fair Game starts where book two (Mind Games) left off from what I've read. Since I haven't read the previous books in the series, I was a little bit lost for the first few chapters but quickly figured everything out. All in all it was a pretty solid read, though a tiny bit slow for me. I enjoyed the relationships that River had with the demon gang of kids, as well as with her younger brother. I loved that the past was mentioned throughout the book so I know what had happened, it helped me fill in a lot of blanks. I strongly suggest this series be read in order, but it doesn't have to be. If you enjoy science fiction books with a strong intellectual woman you will love this book.

This review was first published at www.OnceUponARomance.net
Posted by LilyElement at 12:00 AM