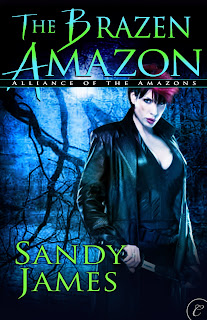 
Book Description:
Zach Hanson is a tech wizard, capable of creating and improving gadgets... including remote nuclear warhead launchers. But he's always known that he's destined for something more, something greater, something...supernatural.

Powerful Air Amazon Gina Himmel is one of four sisters called to protect the world from those who would do it harm. Demigods in league with an Ancient have been taking over the bodies of leaders in the military and technological sectors, and Gina is sent to San Francisco to watch over Zach.

Under Gina's protection, Zach is introduced to a world of ancient deities, rogue gods and the bold, brazen Amazons who keep humanity safe. Amidst the whirlwind of battle, Zach and Gina discover a love that could give them the power to save the world...or destroy it.

The Starbucks became a battlefield. Gina punched the first SOG in the throat before he could block her attack. Her front sweep knocked him flat on his back. Before she was able to rise to her full height, one of them jumped over his fallen brother and plowed into her. She shoved him off, then landed a solid kick to his groin before he could recover his balance. Another SOG down—hopefully out of the fight for good—as he rolled around screaming, his hands covering his damaged testicles. She hoped they were lodged in his gut. Her kick had been more than enough to put them there.
Served him right.

Taking a fighting stance to face the third attacker, she saw the first getting back to his feet. She desperately wanted to look over her shoulder to check if Richard was getting Zach out of the line of fire, but the two SOGs closing in on her kept her total attention. At least Richard wasn’t trying to rejoin the fight. Then she’d have to protect him, too.

She glanced over at “Joel Woods.” He, too, was getting back to his feet.

The odds were four to one.

Gina allowed herself a smug smile.

Two of the goons jumped her at the same time. The first grabbed her in a bear hug while the second reached out to touch skin.
She surrendered her weight, making the first SOG bend forward, then ducked and drove her head into the shocker’s midsection. The head of the guy holding her hit the attacker’s skull with an audible thud that brought a grin to her lips.

A hand brushing her skin threw a jolt, but she was able to pull away fast enough to stop debilitating pain. Gritting her teeth against the burns that made her whole body flush hot, she shoved one of the SOGs aside, buried her fingers in the shirt of the shocker and tossed him over the counter. He and the espresso machine ended up on the floor. His screams told her the burns he’d put on her arm had been repaid by the steam pouring out of the machine.

When testicle boy struggled to his feet, she gave him another groin kick. The groan he made as he fell to the ground sounded like a constipated moose. That image made her grin.

“Joel Woods” stumbled at her, arms spread wide. She ducked under one arm before kicking the back of his knees. As he fell to the floor, she gave him a hard kick to the back of the head that would put him to sleep for a good long while.

Feeling cocky, Gina crooked her finger at the fourth SOG.

He looked at his fallen brothers, first the one who was screaming in pain as he struggled to push off the heavy espresso machine, then to testicle boy who was gagging and retching like he was about to toss his cookies, and finally to a prostrate “Joel Woods.” The fourth SOG’s face blanched. He turned and ran.
“Chicken shit. Come back here and fight!” 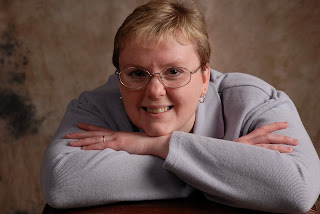 About the Author:
Sandy lives in a quiet suburb of Indianapolis with her husband of thirty years and is a high school social studies teacher. She and her husband own a small stable of harness racehorses and enjoy spending time at the two Indiana racetracks.

The Alliance of the Amazons urban fantasy series from Carina Press has premiered with book 1, The Reluctant Amazon, book 2, The Impetuous Amazon, and book 3, The Brazen Amazon. The series concludes with book 4, The Volatile Amazon, in September.

Look for a new contemporary romance series from Grand Central Forever Yours in 2013/2014!