Spotlight/Giveaway: What’s A Witch To Do? 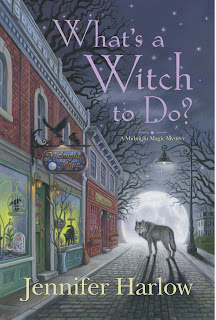 What’s A Witch To Do?
A Midnight Magic Mystery #1
Jennifer Harlow

Mona McGregor’s To Do List:
• Make 20 13 potions/spells/charms
• Put girls to bed
• Help with Debbie’s wedding
• Lose 30 pounds before bachelorette auction
• Deal with the bleeding werewolf on doorstep
• Find out who wants me dead
• Prepare for supernatural summit
• Have a nervous breakdown
• Slay a damn demon
• Fall in love

With her to-do lists growing longer each day, the last thing Mona McGregor—High Priestess and owner of the Midnight Magic shop in Goodnight, Virginia—needs is a bleeding werewolf at her front door. Between raising her two nieces and leading a large coven of witches, Mona barely has time for anything else. Not even Guy, the handsome doctor who’s taken an interest in her.

But now there’s Adam Blue, the sexy beta werewolf of the Eastern Pack who’s been badly hurt, warning Mona that someone wants her dead. Hell’s bells! A demon is stalking her, and Mona starts to suspect her coven members and even her own family could be responsible for it. With two attractive men and a determined demon after her, Mona teams up with Adam to find out who really wants her dead.

Jennifer Harlow spent her restless childhood fighting with her three brothers and scaring the heck out of herself with horror movies and books. She grew up to earn a degree at the University of Virginia which she put to use as a radio DJ, crisis hotline volunteer, bookseller, lab assistant, wedding coordinator, and government investigator. Currently she calls Northern Virginia home but that restless itch is ever present. In her free time, she continues to scare the beejepers out of herself watching scary movies and opening her credit card bills.

Giveaway:
Tour Wide Giveaway - 5 print copies- open to US Shipping
a Rafflecopter giveaway
Posted by LilyElement at 12:00 AM