Spotlight/Giveaway: Snow and the Seventh Wolf 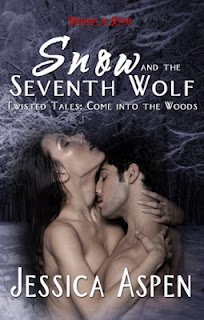 Exiled for attempting to kill his sister’s lover, the last thing Seth needs is to be saddled with a human. But Seth can’t turn his back when he discovers Snow fleeing from her avaricious step-parents murder plot. Isolated in a cabin in the woods, Snow attempts seduction and Seth discovers even werewolves are vulnerable to passion’s temptation. Seth’s angry struggles against his desire drive him away, but his over-protective alpha nature won’t let him abandon a female in distress.

With Snow in danger again, can Seth overcome his prejudices in time to save Snow from her step-parents’ evil plan?

Snow slipped and slid through the deepening drifts trying to catch the disappearing black wolf. For a moment he paused, a ghost wolf silhouetted on a rise. Her heart pounded. Was he waiting for her?

She forced her frozen feet to speed up, tucking her chin and racing toward the hill, but her slick soles betrayed her and she tumbled into a drift. When she looked up, he was gone.

“Wait!” she shouted. The gathering storm swallowed her words whole.

She lay on the ground while the wind drove tiny stinging flakes into her eyes and skin.

She deserved to die here in the snow. By stupidly following what she’d thought was a sign from her dead father she was lost, worse than before. At least earlier, she’d been on a trail. Now she was deep in the wilderness of the Grand Tetons, caught in a blizzard with the early night of winter on its way, her feet and hands slowly growing numb. The wolf hadn’t been her savior, sent from a dead caring father. Instead, he’d betrayed her.

Another howl carried over the rush of the blizzard.

The wolf was still out there.

She staggered to her feet, searching fruitlessly though the curtain of snow for a black shadow. Another howl had her head whipping to the side. Through the gloom of the gathering clouds and snow, instead of the wolf, she saw a light flickering in the trees.

She plowed into the underbrush, pushing through branches that seemed to claw and bite. Following the howls to the flickering light she spotted a tiny cabin, small glowing windows beckoning. She made it to the door and pounded with her last bit of strength.

No one came. Snow sagged against the hard wood. This was as far as she could go.

The door opened with sudden force, and she fell in, landing hard in a man’s open arms. Snow blinked up at the stern dark face of every LA’s director’s twenty-something dream pirate.

Golden eyes, black tousled hair and a build that every actor would kill for.

“Won’t you come in?” he asked, his voice deep and rough and surprised.

Every light in the small living room and open entryway was on, and more lights were on upstairs. She said the first words that tumbled out of her mouth, “Your lights are on, don’t you know we’re trying to save energy?”

An almost rusty sound rumbled deep in his chest, vibrating her body and surprising a smile out of her.

His teeth flashed. “I’m sorry. I’ll turn them off right away.”

He set her on her feet. “Would you like to come in and get warm?”

She took a good look at him, white button down shirt flared wide and unbuttoned showcasing a broad muscled chest.

Touchable black hair curled damply at his neck. His deep gold eyes gleamed secrets, and she suddenly realized she must have caught him naked in the shower.

He looked like a god and she became suddenly aware of her cold sodden clothes, her lank hair dripping snow onto his floor.

“Don’t be sorry.” He stared at her, his enigmatic eyes capturing hers, suspending time as he reached out a hand and stroked a clump of snow off of her hair “You’re gorgeous,” he almost whispered.

His hand trailed down her hair to flick snow on the stone pavers at her feet. Liquid heat pooled low in her pelvis.

The wolf had done the same thing, stared at her with golden eyes, trapping her in its spell. She shook herself free and stepped back, unsettled and shaky with a strange desire. 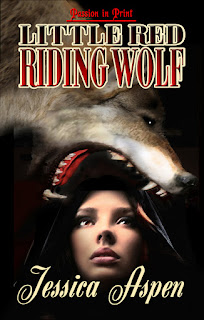 Amazon, BN, ARe, Passion In Print

Tired with being the runt of the litter, feisty Red jumps on the opportunity to take on the sexy new forest ranger, but when Evan uncovers evidence of wolves, things get out of control. Can Red keep her were-wolf identity secret and still save Evan from her brother’s thirst for blood?

Fraternizing with humans is taboo, but when feisty werewolf Red runs into hunky new forest ranger Evan Brewster, she jumps on the opportunity to let loose her desires. Evan is stoked when he meets the petite red haired hottie, and combined with his new discovery of wolves in Colorado, thinks his career and life are made. Then Red pushes him away, her hostile brother threatens his life, and things begin to spiral out of control. Caught between her sexy lover and her pack can Red trust Evan with her secrets, or must she sacrifice her human lover and her heart? 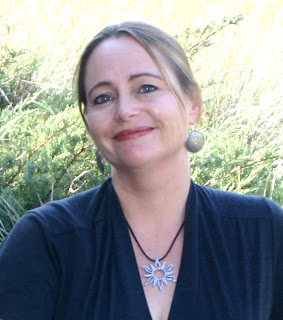 Jessica Aspen writes paranormal romance near the foothills of the Colorado Rockies. Her books are full of elves, were-wolves and sexy men who walk on the dark side of the knife. She loves dark chocolate, walking the dog, hiking and is obsessed with new electronic writing devices. Jessica is also obsessed with writing, and learning about writing. She is a member of RWA, CRW, FF&P and PRO. You can find Jessica most days during the week athttp://jessicaaspen.com


Giveaway: Kindle copy of Snow and the Seventh Wolf