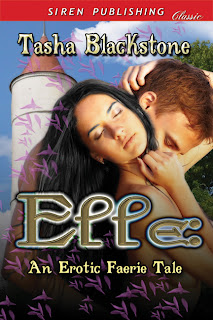 Book Description:
A tangled web of love, magic, and seduction, this retelling of the classic fairy tale Rapunzel is not your mama’s fairy tale.

Elle has lived in solitude, high in the tower, her entire life. When Emmett appears on her balcony, poisoned from the vicious Witch Weed and close to death, she knows she must save him at all costs. Her desire for him becomes unbearable, and when she realizes that he has also stolen her heart, she must decide—risk it all to be with him or let him walk away, missing her only chance at true love.

However, Elle's time is short and her life is in danger. Despina, an Enchantress posing as Elle's mother, needs the magic that lives in Elle in order to survive. Can Elle save Emmett, embrace the love that awaits her, and survive her mother’s dark intentions before it is too late?

As Emmett lay on the bed, watching Rapunzelle weave the tale, he found himself struggling with an inner conflict. He knew that magic once ruled the lands. Peppered throughout the history books were tales of powerful wizards and evil witches who had become consumed by their lust for power over all of mankind. They were said to be the cause of the War of the Witches, which had turned into a battle that, ironically, had ended the rule of magic once and for all. Some creatures of magic still existed, of course. Fairies and Ogres were spotted from time to time in darker corners of the woods. A rock troll still lived up in the mountains in a cave hidden by windy paths and thorn bushes. Even the midwives were gifted healers. It was the fact that Emmett’s experience of climbing a poisoned vine could be real, rather than brought on by hallucinations from tainted faerie water, that bothered him.

His thoughts were interrupted by the feeling of Rapunzelle’s hand on his. He looked up to see her eyes fixed on his with intimidating intensity. She lifted his hand from where it had been lying on the bed and turned it so that his palm faced up. When Emmett looked down to see his hand in hers, his heart skipped a beat. The palm of his hand was covered in red, angry wounds that were in the midst of healing. Some of the deeper cuts had thread sewn through them, keeping them closed, while others were slick with what appeared to be a salve of sorts. Seeing the severity of the wounds caused pain to surge through Emmett’s hands, and sweat began to bead on his forehead.

He pulled his eyes from the wounds and found hers still fixed on him.

“You asked me where you are. I do not know why or how you found me, but your memories are not false. You did climb my tower. I found you on the balcony, covered in blood from your wounds and succumbing to the effects of the poison from the Witch Weed that protects me. I brought you inside so that I could heal you, but you’ve been asleep for several days, and I was starting to think that I’d been too late.”

“Why would you attempt to heal me if you have Witch Weed to keep intruders out?”

A sweet smile crossed Rapunzelle’s lips as she reached up and ran her fingers through Emmett’s hair, brushing it back from his forehead.

“Even a pure-hearted man would never survive the climb. He would have succumbed to the poison and fallen to his death not even halfway up. I figured that there must be a reason that you were able to make it all the way to the top, and it is not my place to interfere with your life path. Healing you seemed to be the only true option.”

A whispered “thank you” was all he could manage, but she didn’t seem to mind.

“I’ve made a stew for us, hoping that you would awake soon and be hungry. Let me get you some, and we’ll start working on getting your strength back.”

Emmett watched as Rapunzelle rushed out of the door to the bedroom, her black braid following behind her. He slowly looked around the room, taking it in with newfound awe. The walls were rounded and made from the same alabaster brick he had been drawn to in the meadow. There was no window, but the roof was fashioned to allow sunlight to fill the space. The room was decorated with paintings of flowers and mountain scenes, and books cluttered the tops of furniture. In the corner, only half-hidden behind a sheer curtain, he saw a copper tub big enough to lie in while bathing. Off to the side behind the tub, he could see a door that opened just enough to reveal a room filled with clothing. The bed sat in the center of the room and was large enough that two of him could comfortably fit side by side on it. It was covered in lush, deep-purple blankets and countless pillows that were scented with jasmine and a spice he was unfamiliar with.

If there had been a choice of being healed in a sterile nursemaid’s wing of the palace or high above the ground in Rapunzelle’s bedroom, sealed away from the world below, he would choose her room every time. Sounds of her preparing his meal drifted in through the bedroom door, and Emmett found himself comforted by it. He closed his eyes and listened as he fell asleep.

His mind was quickly filled with visions of Rapunzelle. She was lying down on the bed beside Emmett, face propped up in the palm of her hand as she stared with longing into his eyes. Her long black hair, free from its restrictive braid, flowed out behind her like black waves. Her other hand reached up, and he felt her fingers trail from his cheek, down his neck, and finally rest on his chest. His heartbeat quickened at the feel of her touch. Her hands were smooth and soft and her touch, though alive with intent, was gentle. She ran her fingers through the little curls of hair on his chest and smiled when she looked down to see his arousal

About the Author:
There was never a day in Tasha’s life when she wasn’t creating new worlds, or characters, or story lines. Even as a little girl, she was often locked away in her grandfather’s office drawing, cutting, pasting, and writing short stories to give to her mom. Using all methods, crayons, pens and pencils, typewriters, and word processors, her favorite was the typewriter. The clickity-clack sound that the keys made as she wrote her stories ignited excitement, and at the young age of eight, she knew she wanted to grow up and be a writer.

Tasha thanks her grandma for her love of books. Her grandma’s home was in all aspects a library with hundreds and hundreds of books on the shelves, all of which Tasha was allowed to read regardless of her age. With the exception of the typical children’s faerie tales, Eyes of the Dragon by Stephen King was the first fantasy novel Tasha had read, and she was hooked. The freedom to create a world without having to follow traditional rules was the most amazing thing ever! Of course, as she grew and decided that boys were no longer gross and infected with cooties, but rather cute and tempting, she turned to romance. Her favorite pastime became writing short stories for her friends and featuring them as the heroine and their crushes as the love interest. When one of the moms found a story and mistook it for a real event, Tasha knew writing truly was her calling.

Though it took a little longer than she had hoped to achieve her dream, the waiting was well worth it.

Tasha has a giveaway going on for an ebook copy of Elle on her facebook. Check it out HERE.
Posted by LilyElement at 12:00 AM