Here are two books on my TBR list. What books will you be reading next? 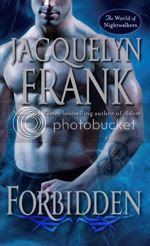 Forbidden - Jacquelyn Frank
From New York Times bestselling author Jacquelyn Frank comes this first book in The World of the Nightwalkers—an exciting and sensual new spin-off series in which the Bodywalkers, an ancient race of the night, battles the evil forces who prey on them.

The unexpected happens in an instant. On her way to work, secretary Docia Waverley hurtles into a crashing crossroads, and she quickly begins to suspect that things will never be the same. Then, when a tall, blond, muscular stranger intervenes on her behalf, telling her it is his duty to protect her at all cost, what is just a feeling turns to proof positive. That is, as long as Docia’s savior doesn’t turn out to be a crazed kidnapper.

When Ram finds Docia, he has no doubt that she is his queen. But as this golden warrior sweeps in to protect her, he feels something more than body heat every time they touch. He is overwhelmed by a searing connection that goes deep into the twin souls inside him. A desire rises in him that is forbidden—this woman is his queen, the mate of his king, his leader, his best friend. And yet Docia is so vulnerable and attractive that she awakens a hunger in Ram that is undeniable, a carnal craving he cannot yield to . . . not without risking the very survival of the Bodywalkers. 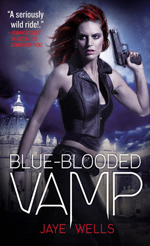 Sabina Kane is on the hunt. Her prey: Cain, the father of the vampire race and the one who murdered her family and her friends. Unfortunately, Cain is hunting Sabina, too.

The one man who holds the key to defeating Cain is, of course, Abel. A mage with secrets to spare and, hopefully, the power to match it. Unfortunately, for Sabina, he's in Rome and may not want to be found.

Sabina sets out for Italy with her friends, Giguhl and Adam Lazarus, to track down the only man who can get her the revenge she hungers for. But will he help her or oppose her? And just who is Abel, really? Worst of all, when Sabina figures out the goddess Lilith has a plan for her-she realizes this trip is getting deadlier by the minute. As they say: when in Rome-SURVIVE.
Posted by LilyElement at 8:00 AM