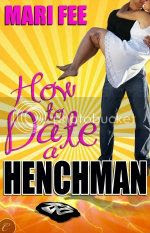 How To Date A Henchman - Mari Fee
Gina Hall is a college dropout with big dreams. Working as the receptionist at EnClo Corp isn't one of them, but she needs the paycheck, and she amuses herself by speculating what the mysterious company actually does. She's even more intrigued when the owner arrives, bringing with him a very attractive man named Burke.

Burke's job is more deadly than dead-end: as head henchman for Gina's boss, aka supervillain Static, he makes sure his boss doesn't end up in jail—or worse. But Static's latest scheme is way more legitimate than either of them are used to. This time they have a real office—with a smart, sexy receptionist.

Unfortunately, Gina isn't the only one curious about EnClo Corp's business. When a superhero starts sniffing around, he proves to be less than heroic, and the lines between good and evil blur. Only Gina and Burke can foil his investigation...provided they can keep their hands off each other long enough to save the day. 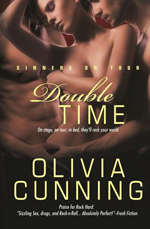 Double Time - Olivia Cunning
Olivia Cunning delivers the perfect blend of steamy sex, heartwarming romance, and a wicked sense of humor in this menage story featuring the hottest guy in the Sinners band.

Trey Mills, the notoriously sexy Sinners rhythm guitarist, gives up his bisexual lifestyle and is swept into a hot, heady romance with Reagan Elliot, a female rock star sensation. But when Trey encounters Reagan's sexy bisexual roommate, Ethan Conner, he can no longer deny who he is or what he wants. Reagan heartily agrees to a solution that opens up a hot new world of sexual experience--and love--with the two men she wants the most.
Posted by LilyElement at 8:00 AM