WoW [27] Something Witchy This Way Comes by HP Mallory 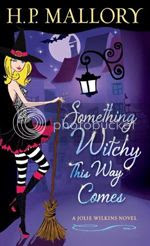 For smart and sexy witch Jolie Wilkins, being Queen of the Underworld is a royal pain. Back from a round of time travel, Jolie must now protect her realm from the sinister Lurkers—a powerful breed of half-humans bent on conquering the undead. And if there’s one thing she knows, it’s that the supernatural never go down without a fight.

At least Jolie has her soul mate (and finally official boyfriend), warlock Rand Balfour, by her side. Honorable, brave, and unbelievably handsome, Rand is everything Jolie wants in a man. So why can’t she forget the dangerously alluring vampire, Sinjin Sinclair? With her private life heating up and a battle boiling over, Jolie sets out to prove that in matters of love and war, the fairer hex has its own set of charms.
Goodreads Link

Why I am waiting:
A lot of people love this series so I read book 4. That book wasn't all that great, but I loved the humor in it. I still need to read the rest of the books to see if that helps me understand everything. This one will be on my TBR list until I read the rest of the series since it looks good.
Posted by LilyElement at 8:00 AM