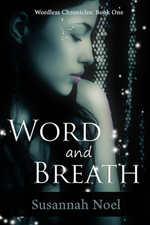 Riana has learned how to stay out of trouble. She spends her days studying written texts in the government’s Office of Readers, and she spends her nights taking care of her sick sister. She always—always—follows the rules. Despite her low profile, she has mysteriously become a target. Someone has kidnapped her sister. Someone else is trying to kill her. And someone has sent a Soul-Breather to beguile her out of her secrets.

Her help comes from the mythic leader of an underground rebel movement. A man who used to be her friend. A man who has silently loved her for years. He disappeared from her life without a word, and now he expects her to trust him again.

Then there’s the Soul-Breather, a man who can taste her spirit with only a touch. He makes her feel things she’s never experienced before, but she doesn’t know if the feelings are real. Hired to deceive and betray her, he offers to help her instead.

Without both men, she can’t rescue her sister. And she can’t discover the world-changing knowledge—buried in her memory—that has made her a target in the first place. 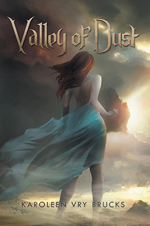 Even as a little girl, Selene had always been adventurous, climbing trees and finding new adventures in every nook and cranny. She was never accepted by either gender—all children thought she was too outspoken and strange. Little did she know how different she truly was until an encounter with a mysterious stranger changes her life forever. Readers can witness the intriguing events unfold in Valley of Dust, a novel by Karoleen Vry Brucks.

From the moment that Lucian saw Selene, he knew she was special and that she was his destiny. He sent his brother, Anton, out to watch over her and protect her while she was still unaware of her true nature. Lucian, however, didn’t foresee that Anton and Selene would be mutually attracted to each other. Will Selene come between the two brothers? How will she handle the truth about what she is and the power that courses through her veins? Readers can unravel the exciting answers as they explore the Valley of Dust.
Posted by LilyElement at 8:00 AM