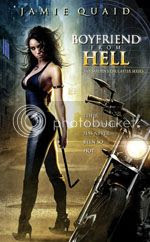 Boyfriend from Hell
They say justice is blind. But Justine isn’t.Justine (Tina) Clancy is just an ordinary law student with a faulty arrest record, a part-time job in Baltimore’s radioactive Zone, and a family secret so bizarre even she doesn’t believe it. That is, until in a fit of fury she damns her boyfriend to hell—and it’s exactly where he ends up.

Much to her surprise, Tina is apparently one of Saturn’s daughters, with the power to wield vigilante justice. But poor Max didn’t deserve to go up in flames, even if he did almost run her over with her own car. Tina’s convinced someone cut the brakes—and now a relentless nemesis is stalking her through the Zone’s back alleys, where buildings glow, statues move, and chemical waste exposure comes with interesting consequences. Tina’s usually a loner, but now she needs a posse like no other: a shape-shifting kitten, an invisible thief, a biker gang, a snake-charming private detective, a well-meaning cop, and her sleazy, sexy boss. But in between freeing Max from hell, saving her own neck, and solving a mystery that threatens the Zone and her newfound friends, how is she ever going to study for finals? 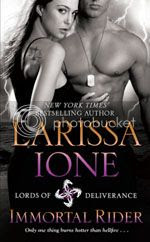 Immortal Rider
Sexy, powerful, and immortal, Limos is on a crash course with destiny. She’s been marked as Satan’s bride and her jealous fiancé wants her all to himself. The only way this Horseman can keep herself—and everyone else—safe is to keep her distance. But not even Limos can save herself from the secrets she’s kept . . . or resist the seductive allure of one very brave human.

Arik Wagner knows the saying “love hurts” better than most, yet he never thought stealing a kiss from Limos would land him in Hell. Literally. It takes all his military training to survive the demon torture, but once he’s topside, Arik realizes that the agony has just begun. With the Apocalypse looming and Satan demanding his bride, will Arik and Limos surrender to the desire smoldering between them? Or will giving in to their passion unleash hell on earth?

Posted by LilyElement at 8:00 AM