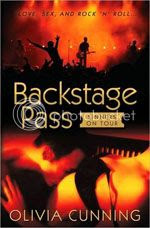 Myrna, a college Human Sexuality professor is thrilled to see the members of Sinners after speaking at a seminar. She talks with the members for awhile and invites Brian, the lead guitarist back to her room so she can take care of him. Little did he know that she just wanted to nurse him back to health after his drinking binge. The next morning when they both wake up it gets freaking hot. While having sex, Brian starts humming and asks for something to write on. Not finding anything, he writes his new riff on her back and later shows his band members. This pretty much cements Myrna's place of being with Brian and around the band.

The sex scenes are all scorching, but I found it a little bit repetitive with Brian scrambling for a piece of paper and a pen to write a song. The story revolves around Myrna and Brian, but includes the rest of the band as well, since most of the book is while they're at shows, on the bus, at a hotel, etc. It is well written and was one of those books where I had to read it in one sitting. I fell in love with the characters and had to know more.

I suggest this book if you like erotica, and rock stars.
Posted by LilyElement at 8:00 AM