Review: The Witch Is Back 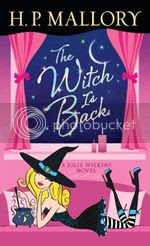 Jolie, a psychic, runs a fortune telling shop and is unaware of the full extent to her abilities. The book starts with Jolie meeting a guy named Sinjin that is incredibly good looking and seems almost too good to be true. Unaware of his true nature, she goes on several dates with him before finding out what he really is. While processing her feelings and thoughts she meets another man named Rand and this is when things start to become confusing for poor Jolie. Clearly one of the guys is lying to her, but if you haven't read the previous books in the series you will wonder who is telling the truth, and who is leading her astray. It doesn't take very long to figure it out though, and the rest of the book is pretty much how Jolie and the guys deal with it.

The book itself was a light read that kept me interested and intrigued. I would suggest reading the previous books in the series to understand the details and know what exactly is going on. You don't really have to, but I didn't know the characters or why everything was happening so it would be helpful. The characters were interesting and engaging, I didn't want to put the book down and had to force myself since I started it late at night. I did notice that there are a few times where Jolie was clueless, and some of the plot is obvious but she doesn't get it until later. Other than that this book was pretty good. I'll try to read the previous books in the series to see if that helps, and if so I will re-review this at a late date.

Disclosure:  I received a free copy of this book via NetGalley to give an honest review.
Posted by LilyElement at 12:00 AM